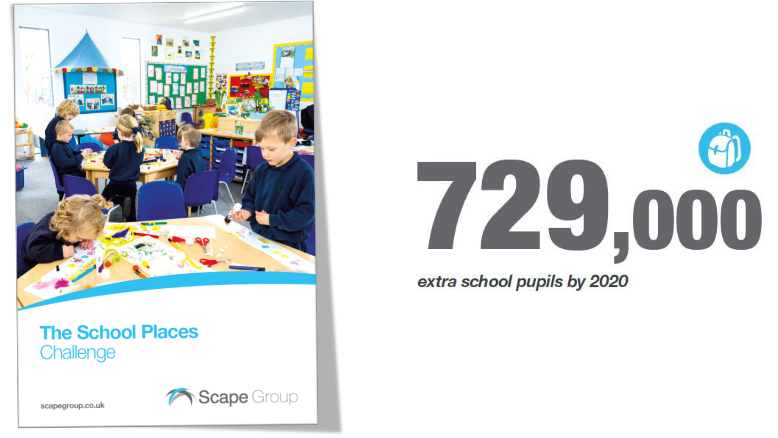 More than 2,000 new schools must be built within the next four years to accommodate the rising number of primary and secondary pupils in England, according to Scape Group’s latest ‘School Places Challenge’ report.

The research has revealed that local authorities are expecting an additional 729,000 pupils in education by 2020 – a rise of 8.6% in primary school pupils and 12% in secondary school pupils in England alone. To tackle this increase, the equivalent of two new schools must be created each working day.

London, the South East and East of England are experiencing the highest growth with more than 375,000 additional primary and secondary pupils expected to be added to the registers in four years’ time.

Of the total 2,122 new schools needed, the equivalent of 12,209 primary classrooms and 12,078 secondary classrooms, London requires 507 new schools. The London Borough of Barking and Dagenham will see the biggest increase in pupil numbers, requiring a total of 28 new schools, followed by Lambeth, Newham and Greenwich, which need 21, 37 and 25 new schools built, respectively.

Outside of London, the Northern Powerhouse city of Manchester will see numbers rise to almost 19,000 extra primary and secondary pupils by 2020 – a 27% increase that will require the equivalent of 57 new schools. Rapid growth in the cities of Bristol, Peterborough, Milton Keynes, Leicester and Nottingham will also mean that new schools will become highly sought-after should the necessary amount not be built in time.

Mark Robinson, Scape Group Chief Executive comments: “As the growth of the primary school population gathers pace, the pressure on school places will soon transfer to the secondary population, requiring a new wave of advanced school building. The government’s preference for free schools has created uncertainty for local authorities, who are tasked with planning and building new schools, but will not be responsible for running them. Proposals for new grammar schools has further muddied the waters.”

Leaving the EU could have a profound effect on the UK population – we could see a short term surge in migration from Europe or a drop off in numbers if migrants are put off coming here. It is very difficult to predict what impact Brexit will ultimately have, putting even more pressure on local authorities who are planning how and where to prioritise school-building.

“In a post-Brexit economy, with all of the uncertainty this brings, the construction of new schools must be a top priority for government and local authorities must be given the tools and funding necessary to deliver extra places in time. Creative solutions including standardised design, classroom extensions and larger ‘super-schools’, as well as more effective use of land to deliver mixed-use developments, are all options we need to look at to deliver more new schools.”

From deprivation to dream homes