All News
You are here: Home1 / All News2 / Building News3 / Commercial & retail construction at its strongest for more than four... 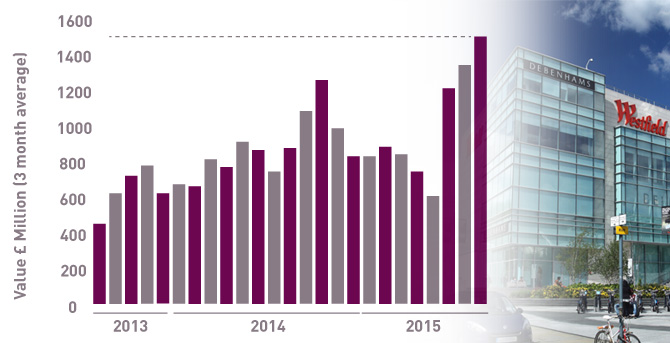 The total value for commercial & retail construction contracts in August were worth more than £1.5 billion, the highest in over four years, based on a three month rolling average.

According to the latest Economic & Construction Market Review from Barbour ABI, it was a busy August for the commercial & retail sector but in particular office construction, which dominated the sector for the month with 84 per cent of the total value of contracts awarded.

To put the growth of commercial & retail contract values into perspective, the last three months have each had more than double the value when compared to that in May. August also experienced an increase of more than 70 per cent when compared to the same month last year.

London led all regions with over 60 per cent of the total amount of commercial & retail contract values in August, including eight of the top ten biggest projects. Contracts for major office developments were finalised including the £150m Park Place development in Canary Wharf and the £100m Marble Arch project in Westminster.

Commenting on the figures, Michael Dall, lead economist at Barbour ABI, said “After an unstable start to the year, commercial & retail construction has picked up dramatically to the point where August has been the strongest month for more than four years.”

“It’s not surprising to see London dominating the sector once again. As a global city, we’re seeing more and more demand for office space in the capital, hence the massive projects awarded contracts this month. Even with the recent spike in office construction work being put on hold, this isn’t putting off investors rolling the dice with new projects looking towards the future and the potential gains to be made from London property.”

“Over the last three months and in particular August, demonstrates that there is a major demand for office space and willingness from investors to spend and commit to new projects. The long term growth for this sector is looking positive, and when commercial & retail is strong it can often be a sign that the economy as a whole is performing well.”