All News
You are here: Home1 / All News2 / Building News3 / Retail construction sees a decline in value but contract numbers hold ... 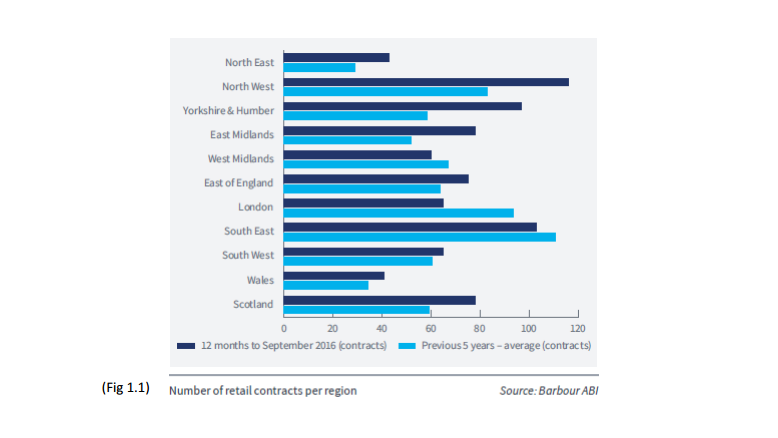 Even though the internet continues to eat into the share of retail spending (15% market share in October 2016), this has not detracted the industry from building in 2016, albeit showing a widespread trend towards smaller project contracts.

According to the ‘Does retail offer real opportunity?’ report from construction industry analysts Barbour ABI, the key change in work coming from the sector is that construction projects are smaller, fitting in with the emphasis that is being placed, especially by larger retailers, towards an nincrease in smaller, more local retail units.

Retail construction accounts for £4.7 billion pounds a year, down from the £8 billion pre-recession peak. The report also describes how physical stores are still pivotal to the strategies of most retailers, as major opportunities look to be available over the next few years, particularly for architects who can rethink retail space and develop nexus between the physical and digital shopping experience.

Across 2016, the twenty largest retail projects accounted for a value of more than £570 million, with £421 million coming from the South of England which is 74 per cent of the total. However, interestingly it was the North West of England that led all regions with the highest overall number of contracts in the retail sector over the 12 months to September (see fig 1.1).

The two largest projects by value in retail construction last year were the Charter Place shopping Arcade in Watford valued at £178 million and the £75 million O2 retail village outlet in London.

Commenting on the figures, Michael Dall, Lead Economist at Barbour ABI, said “Ultimately today’s retailer is looking to improve the experience of their customers. That has been reflected in how they design and use the buildings they occupy, which has ultimately resulted in smaller, more frequent projects, making up for the declining overall value of retail work over the past five years for the construction sector.”

“The value of work may have shrunk, but the number of projects being let by retail clients is holding steady, providing similar numbers of opportunities to impress clients.”