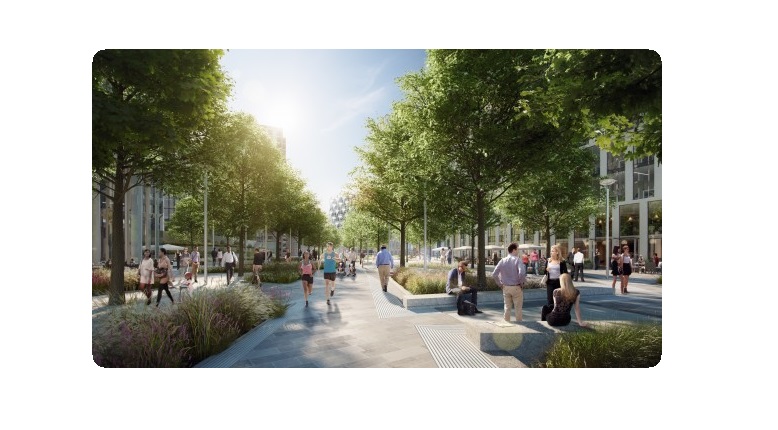 An ambitious new project designed to dramatically cut the amount of clean rainwater becoming contaminated in London’s sewers is set to be launched this summer across the Nine Elms on the South Bank regeneration area.

Rainwater landing on an area the size of 20 football pitches will be channelled back into the Thames to stop it entering the capital’s overstretched sewers where it would mix with raw sewage.

This will reduce flood risks and save the huge amount of energy and cost involved in treating rainwater after it combines with waste from sinks, toilets and washing machines.

The £14m project will be the biggest sustainable urban drainage system (SUDS) in the UK and has been developed through an innovative partnership between Thames Water and the Nine Elms Vauxhall Partnership, which includes Wandsworth Council, Lambeth Council, the GLA and local developers including Ballymore.

New developments in Nine Elms have pioneered design features in new buildings and landscaping that capture rainwater, and increase evaporation before directing flows to a surface water network.

The rainwater will then drain into large underground pipes buried beneath the new Nine Elms Park, which will be a new green channel through the area from Vauxhall to Battersea Power Station.

After heavy rainfall the water will be gradually pumped from this underground reservoir into the Thames via an upgraded pumping station in Ponton Road.

Thames Water sustainability director Richard Aylard said: “By keeping the rain out of our combined sewers we are reducing the risk of flooding, pollution and pressure on our sewers, this will become especially important in the long term as London’s population continues to grow rapidly and the climate changes. It is about putting surface water back where it belongs – in the river. Development and regeneration across London is a major opportunity to do something different with surface water – to take it out of sewers, create additional capacity for new homes and businesses and allow areas like Nine Elms on the South Bank to thrive. Initiatives like this will also help to prolong the life of the Thames Tideway Tunnel.”

Leader of Wandsworth Council and co-chair of the Nine Elms Vauxhall Partnership, Ravi Govindia, said: “This is the city’s most ambitious sustainable drainage network and a real step forward for London’s green infrastructure. The project is another major achievement for our regeneration partnership as it transforms this old industrial part of the South Bank into a modern city centre business hub and cultural quarter.

“In Nine Elms we are creating up to 4,000 affordable homes, two new Tube stations and 25,000 new jobs. In the months ahead we will see the opening of the new US Embassy, a new Riverbus pier and the launch of the new ‘village hall’, shops, restaurants, bars and public spaces on the Battersea Power Station site. There is much to look forward to.”

Tristan Stout, Senior Development Manager at Ballymore, which has been heavily involved in developing the project, said: “We have ensured that Embassy Gardens integrates effective water management throughout through green roofs and rainwater gardens in the new streets of Embassy Gardens and through the landscape design of Nine Elms Park. Collaboration with Thames Water has enabled these features to be integrated into a strategic surface water network, which does not just reduce the flow, but removes it entirely from the existing network. This collaborative approach is one we hope will be replicated throughout London to make the city more resilient to the future climate change challenges.”

The unique drainage network will interact with a variety of eco-friendly rainwater design features included in new developments across Nine Elms. These include green roofs, swales – ditches containing vegetation used to remove pollutants – and streets with rainwater gardens which allow water to evaporate into the atmosphere, irrigate plants and generally reduce the volume of rainwater flowing back into the river.

Other cabling for amenities to serve the area’s new businesses and homes will be laid above the new drainage system at the same time, reducing future disruption to the road network.