All News
You are here: Home / All News / Building News / History of construction pt 1: Engineers demonstrate cantilever system in... 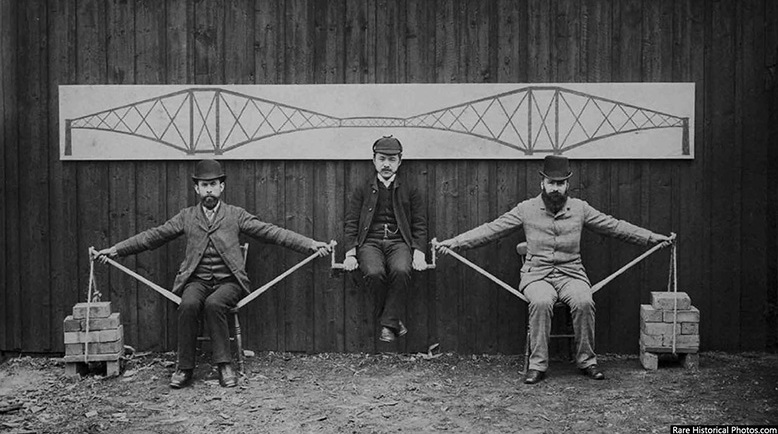 In this series of short articles, buildingspecifier will delve into the history of construction, considering how technologies and old schools of thought have helped shape the built environment we all live and work in today.

The picture above, found on www.rarehistoricalphotos.com, shows project engineers from 1887 demonstrating the cantilever principles of the world famous Forth Bridge in Scotland. The weight of the central section of a cantilever bridge is transmitted to the banks through diamond shaped supports. Representing the weight in the middle is engineer Kaichi Watanabe, one of the first Japanese engineers who came to study in the UK. The other two men, Sir John Fowler and Benjamin Baker, provide the supports. Fowler and Baker represent the cantilevers, with their arms in tension and the sticks under compression, and the bricks the cantilever end piers which are weighted with cast iron. The action of the outer foundations as anchors for the cantilever is visible in the placement of the counterweights. These are the men that designed the Forth Bridge, which still stands proud to this date.

The bridge itself was built in 1890 and boasts the impressive full length of 2,528.7m, with its longest span being 520m.

Cantilever bridges originated in the 19th century when people began to start thinking laterally about how they could ultimately build longer bridges. Engineers learned that by including many supports throughout the design, any load would be distributed evenly throughout the entire structure, allowing them to build longer and more structurally sound bridges.

Engineers such as Fowler, Baker and Watanabe (pictured above) helped to push the construction and engineering sectors forward, allowing them to flourish and become the amazing industries they are today.

Which methods of construction do you think should be in our next instalment of historical highlights? Let us know in the comments section below!

The interior design trends that devalue a house the most

Appleby calls for a change in Fire Safety Regulations