All News
You are here: Home1 / All News2 / Building News3 / Could Battersea chimneys be turned into giant Tesla coils? 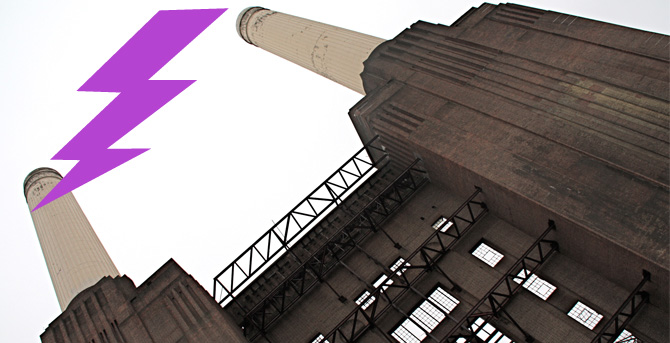 Danish architect, Bjarke Ingels Group (BIG) has revealed an interesting concept to transform the four chimneys at the Battersea Power Station project in London into the largest Tesla coils on Earth.

The purpose of the coils would be as a form of public art, partially powered by the high volume of foot traffic that passes by underneath the giant chimneys. The pavement below could generate a kilowatt of energy from the pressure on plates created by footsteps – known as the piezoelectric effect. This energy would then create a spectacular burst of electricity between the chimneys – a physical testament to the true power of the collective.

Bjarke Ingels unveiled the unusual idea at a lecture at the Royal Academy, saying “We’re working with experts in Tesla coils, looking into how to incorporate them into the chimneys so essentially we might celebrate the transformation from carbon footprint to human footprint.”

“We imagine it like Big Ben; when the clock strikes the hour, we can have this celebration of human energy and human life.”

“It could be interesting to create a public artwork that ties into the heritage of the power plant.”

A Tesla coil (created by Nikola Tesla around 1891) consists of two parts: a primary coil and secondary coil, each with its own capacitor. (Capacitors store electrical energy just like batteries.) The two coils and capacitors are connected by a spark gap — a gap of air between two electrodes that generates the spark of electricity.

Electrical engineer Greg Leyh and his colleagues in San Fransisco are currently fundraising to construct two 37m Tesla coils in a bid to understand more about lightning. These are on track to be the largest in the world – however, Bjarke Ingels are proposing an astounding 91.5m set of coils.

Whilst unlikely to be approved, the concept illustrates that there are still bright sparks within the world of architecture; pushing boundaries and helping take the artform into the brave unknown.

The Battersea project is due to be completed in 2019.

Talking in Your Client’s Language
Scroll to top