All News
You are here: Home1 / All News2 / Building News3 / Birmingham’s New Street Station crowned UK’s Project of the Year a... 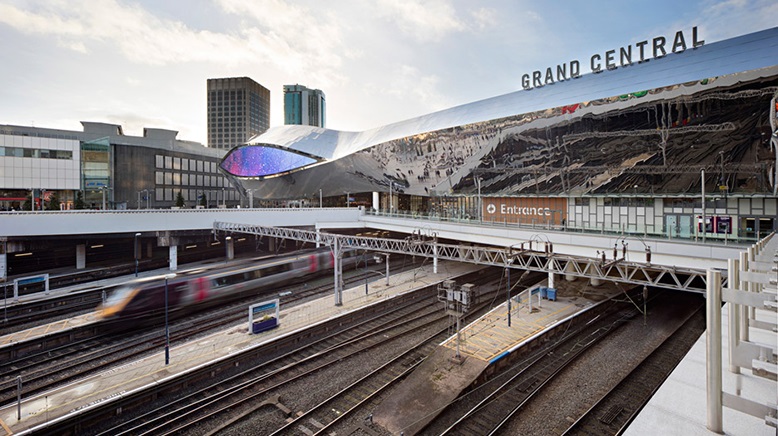 Following a major £1bn redevelopment, Birmingham’s New Street Station has been crowned UK Project of the Year at the 2016 RICS Awards Grand Final.

The national RICS Project of the Year accolade is presented to the scheme which demonstrates outstanding best practice and significant benefit to their local area and wider economy. The redevelopment of Birmingham’s New Street station and Grand Central triumphed over 90 of the UK’s most impressive property schemes to gain the top award.

The Birmingham Gateway & Grand Central project – delivered by a team including Mace, Network Rail, Birmingham City Council and Turner & Townsend – was described by our judging panel as the most significant investment in regenerating Birmingham in a generation.

The new Birmingham’s New Street station and its former Pallasades shopping centre opened as Birmingham Grand Central in September last year. The £1bn scheme has transformed it into a popular retail and leisure destination and world-class station – five times the size of the original station – with a striking soccer pitch-sized atrium. Meanwhile, the new shopping centre – above the station – is now home to the biggest John Lewis outside of London and a mix of premium high street brands and eateries.

As one of Britain’s largest and most important cities, Birmingham deserves a station and shopping and leisure destination of this remarkable calibre. This investment in the city has created around 10,000 jobs and is expected to deliver around £2bn in economic benefits.

David Tuffin FRICS of Tuffin Ferraby Taylor LLP said “It is the catalyst for further regeneration in other parts of the city centre, which will create even more jobs. The team behind Birmingham Gateway and Grand Central should be extremely proud. 180,000 passengers continued to use the station during the works, yet they still managed to create a visually striking, yet practical international gateway into Birmingham, on time, from which the city, its residents and visitors will prosper from enormously.

“Each of these schemes is of an exceptional calibre. I’d like to extend a huge well done to the teams behind them as these projects are all positively contributing to their local communities and our country’s economy.”

Category winners from each of the 12 regional RICS Award ceremonies – held earlier this year – competed to win the national accolade in their respective category, with host, Gethin Jones, Broadcaster and TV personality announcing the winners.

Forbo ‘brings the outside in’ at The Kelpies Visitor Centre

Phoenix balustrading rises to the occasion

Realising the design potential of Tilebrick

Road reinforcement could save councils millions in repairs

BIM TOP OF THE AGENDA FOR ACTAVO | BUILDING SOLUTIONS

LED is the Jewel in Lighting’s Crown
Scroll to top