Rinnai’s sponsorship of one of the biggest names and contenders in rugby league – Widnes Vikings – is kicking off at the start of this season.

The sponsorship, by a UK leader in hot water heating units and systems, will see the Rinnai logo and brand name displayed on the back of all Widnes players’ shorts. This will be the first time both parties have taken this unconventional but innovative style of sports sponsorship.

Recently, as our pic shows, the players met with Rinnai personnel to do some filming at the Widnes Vikings home ground. Says Rinnai Associate Director, Chris Goggin: “We have been filming some of the players and our technical staff at the training ground with some of the products. These short films will make their way on to YouTube and other social media. We are absolutely delighted to take an active sponsorship with Widnes Vikings, one of the biggest names in Rugby League. We share a common belief and approach in terms of excellence, innovation and responsibility to the wider community, and together we will be putting in place a specific social responsibility programme that we absolutely believe in – it is the right thing to do, simple as that.”

Rinnai is a worldwide brand name and has taken some major global sponsorships – including the Queensland Reds, The World Club World Cup event held January this year in Tokyo, the World Ice Skating Championships and the US Nascar competition held in Daytona, Las Vegas and other major American venues.

“The Widnes Vikings are also local to our own UK headquarters so it is all an excellent fit. We look forward to working with the team and staff.”

For Widnes Vikings CEO James Rule says: “2016 has been another landmark year for us as we chase our highest ever league position in Super League history whilst leading pioneering community engagement initiatives such as the newly launched Game Changer programme.

“Our business and the success we produce on and off the field is driven by the quality of our people and it has been evident working with Rinnai that we are welcoming into the Widnes Vikings “One Club” family a committed partner staffed by quality people who buy into our vision and who want to play an integral role in moving forward with excellence”.

The sponsorship package will see the Rinnai name featured in several ’live’ televised games on Sky Sports and in TV shows such as BBC’s ‘The Super League Show’. 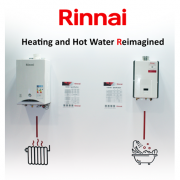 Rinnai and the art of Zen + Zen Plus