All News
You are here: Home1 / All News2 / Building News3 / New BBC HQ proves the Kawneer door to Cardiff’s heart 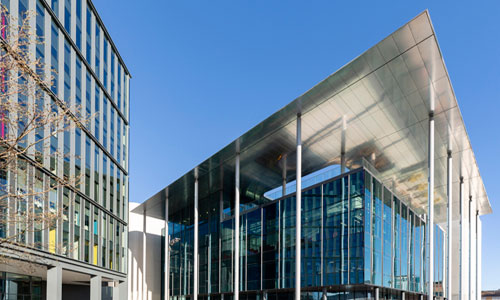 Two types of curtain walling, and entrance doors, by leading UK manufacturer Kawneer, including the first use in the UK of a new severe duty welded door, feature on an award-winning building at the heart of the dynamic redevelopment of Cardiff’s Central Square.

Kawneer’s AA®100 capped and zone-drained aluminium curtain wall, complemented by its SSG (Structurally Silicone Glazed) and mullion-drained sister product, have been used throughout the glittering façade of the striking new headquarters building for BBC Cymru at Three Central Square.

They in turn are complemented by thermally-superior AA®720 doors and the new dual colour AA®190 TB severe duty welded doors with class-leading thermal performance that is so robust they are offered with a lifetime guarantee.

The project, designed by Foster + Partners and built by main contractor ISG Construction for developer Rightacres Property, won a 2019 RICS Wales award for Design Through Innovation, and it is easy to see why.

The 2,000-tonne steel frame is an essential design feature, as part of the design’s focus on the building’s visibility. It is left exposed underneath a glass roof garden canopy supported by 10 28m-high supporting steel columns, with the frame’s connections forming a diamond shape in the centre.

The building is designed to be open and welcoming – visitors can access the ground floor and look up through a full-height atrium into the working spaces above, as well as into a new café facing the square. The design also establishes a sense of openness and transparency between different departments to create new opportunities for collaboration and interaction.

The heart of the headquarters is a 4,000m2 ‘hub’ which extends across three linked levels and incorporates studios, offices and production facilities. The scheme includes a sheltered garden on the hub’s roof which is connected to a restaurant and provides a unique venue for filming as well as a valuable social amenity for staff.

The project targeted BREEAM ‘Outstanding’ environmental accreditation with strategies such as chilled beams, locally-sourced and recycled materials, and an efficient envelope. Mechanical systems have been carefully integrated to create a highly flexible interior which can anticipate and respond to changing technologies.

Adam Newburn, partner at Foster + Partners, said: “The Kawneer system was proposed by the façade contractor, Dudley’s Aluminium. We looked at the product closely and found that it met the performance requirements of the design.”

The glazed elements are fundamental to Foster’s design which was to have large-format curtain glazing so the Kawneer products were instrumental in allowing that to happen. They met the aesthetic and performance intent of the design, enabling the design intent to shine through and integrating seamlessly with the rest of the façade.

Located opposite Cardiff Central railway station, the project is situated on the site of the former bus station. Works on Plots 1, 2, 3 and 6 have completed, or are near completion, and works on Plot 4 are to start soon, and this will create a dynamic area known as Central Square.

The innovative spirit of the project was defined by the BBC’s vision to be the most creative organisation in the world, its commitment to create genuine public engagement and the idea to create an open and attractive workplace. Broadcasting studios usually require a controlled environment for operations, yet the building manages to achieve the contrasting aims of the project to open up to the public as well as be a world-class broadcasting hub for BBC Cymru.

RICS judges said the project created a dynamic principal building for the Central Square redevelopment and that the team behind it had created a “spectacular” commercial, pre-let building.

Historically, Central Square was the site of the planned settlement of Temperance Town, a 19th Century inner-city suburb, which was demolished to make way for Cardiff bus station which opened in 1954, and office buildings.

For many years the area suffered from a lack of sustained investment. Despite its significant public transport attributes, it failed to deliver high levels of economic activity and provided an underwhelming and unwelcoming arrival for many visitors. The case for regeneration of the site was made because the existing under-development was hindering Cardiff’s potential.

Cardiff’s rapidly changing skyline reflects the capital’s huge economic growth over the past 10 years. Central Square is within the Central Cardiff Enterprise Zone which is already home to several financial and professional service businesses.

One of the primary aims of the project was to give back to the city and the relocation of BBC Cymru from Broadcasting House in Llandaff acted as a catalyst for change, creating the opportunity to regenerate the historic site and unlock the heart to the city.

The future of retrofitting is offsite

RINNAI ANNOUNCES LAUNCH OF THE TRUST PARTNERSHIP
Scroll to top