All News
You are here: Home1 / All News2 / Building News3 / Birmingham’s centenary square to get a facelift 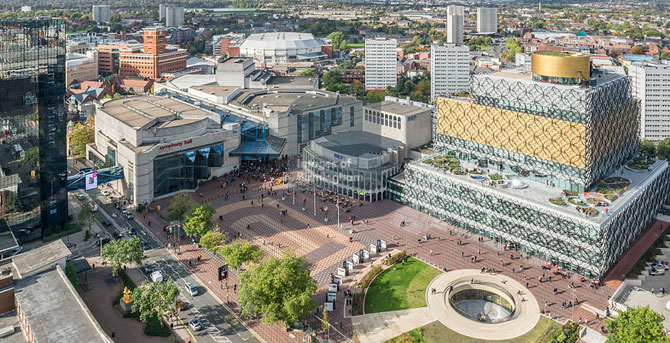 Birmingham’s centenary square to get a facelift

Architects and designers are being urged by the City Council to offer ideas and suggestions for the redesign of one of Birmingham’s most iconic areas. News of the regeneration comes shortly after Birmingham Library is narrowly pipped to the post for RIBA Sterling 2014 prize by Liverpool’s Everyman Theatre.

Centenary square is one of Birmingham’s most popular open spaces, bordered by grass and paved gardens. The square is undoubtedly a beautiful urban vista, providing spectacular views of the new Birmingham library, with its golden façade and fretwork standing proud in its centre. The square is often filled with students reading, lunching professionals, children playing and tourists sporting cameras. It is considered a cultural hub in the city.

The square is surrounded by a plethora of impressive architecture, monuments and statues. Some of the key buildings that aid in capturing the true essence of the area are the library, the old rep theatre, the symphony hall and the International Convention Centre.

The area has already undergone great changes recently, obviously the addition of the library being one but also with the transformation of other surrounding buildings currently underway. There is also work due to start soon on Arena Central, Paradise Circus and the Metro Extension. The council now believe that in order to keep up with the pace of progress the square itself will require looking at in a bid to ensure that it keeps up to date with its contemporary surroundings.

A competition has been announced by the Royal Institute of British Architects and the Landscape Institute on the Council’s behalf. The competition to win the contract to develop the public space is open to architects, landscapers, urban designers and students across the world.

The funding will be made available by Enterprise Zone and the remaining cash provided by the public from various other developments surrounding the square. The budget is reportedly set to be substantial, meaning there will be adequate monies to turn even the most radical designs into a reality should it be deemed desirable by the judging panel.

Initially, RIBA will require digital submissions only, with the shortlisted five then advancing onto the second stage of the competition. Shortlisted designs will receive a £5000 honorarium and will be judged by an elected panel in March next year.

Councillor Ian Ward, deputy leader of Birmingham City Council says that the ideal outcome will be that centenary square becomes “a place for people to relax and socialise on a more informal basis in addition to the organised events already held there.”

For further information or to enter your own design for the square, please visit http://www.ribacompetitions.com/centenarysquare/. The closing date for entries is 02/12/14 at 2pm.

ROCKFON launches a better grid installation in just one click

Disability + Architecture = Inclusive Design: Access for All
Scroll to top