The shortlist for the prestigious 2016 RIBA Stirling Prize for the UK’s best new building has been announced today (Thursday 14 July). The six shortlisted buildings will now go head-to-head for architecture’s highest accolade, to be awarded by the Royal Institute of British Architects (RIBA) on Thursday 6 October 2016. Now in its 21st year, the 2016 RIBA Stirling Prize is sponsored by Almacantar.

A partly-subterranean house on a sloping plot in the Forest of Dean (Outhouse); the conversion of an entire street of listed industrial buildings into a free public gallery for artist Damien Hirst’s private collection (Newport Street Gallery); a radical new landmark university building in Oxford (Blavatnik School of Government); a flagship high density housing development on a regenerated site in south London (Trafalgar Place), a new college campus that reinstates the value placed on civic education in post-industrial Glasgow (City of Glasgow College) and the restoration and significant reinvigoration of a Grade II listed building that is home to one of the world’s greatest research libraries (Weston Library). This is the 2016 RIBA Stirling Prize shortlist: 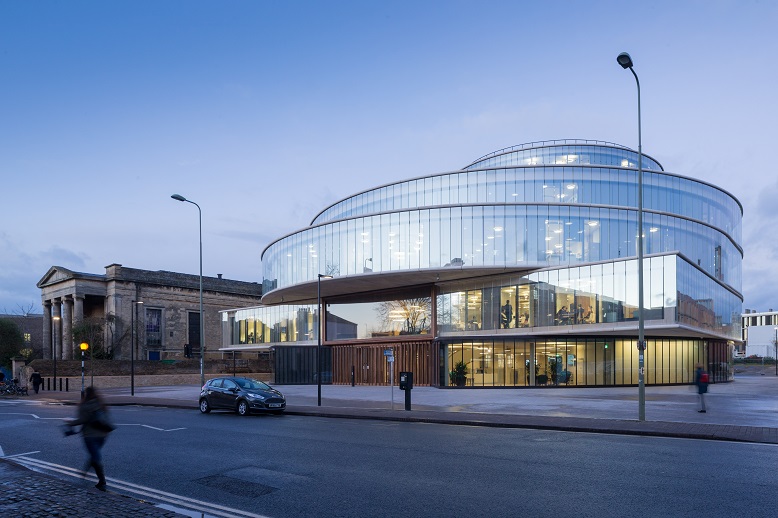 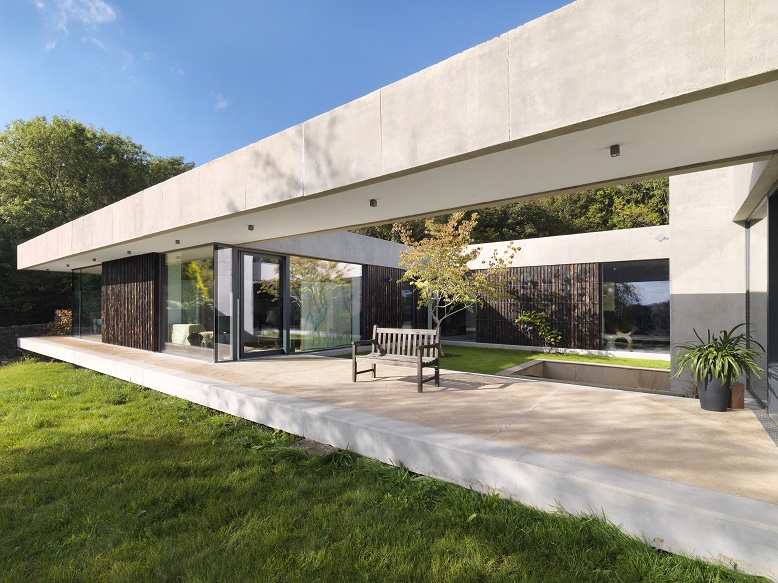 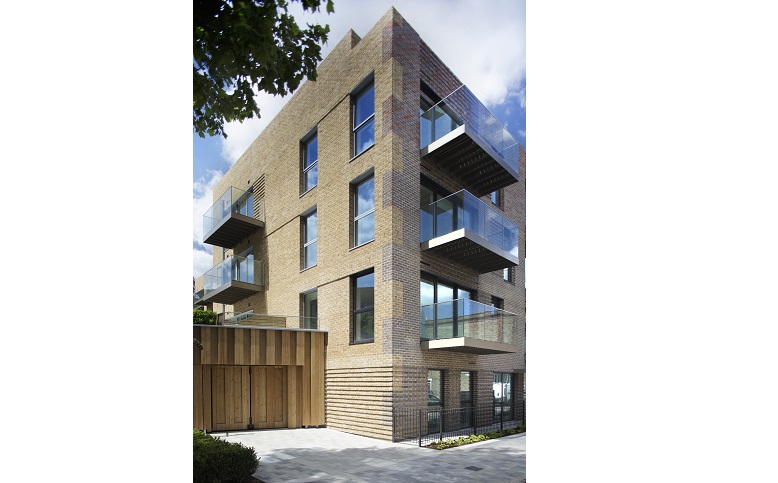 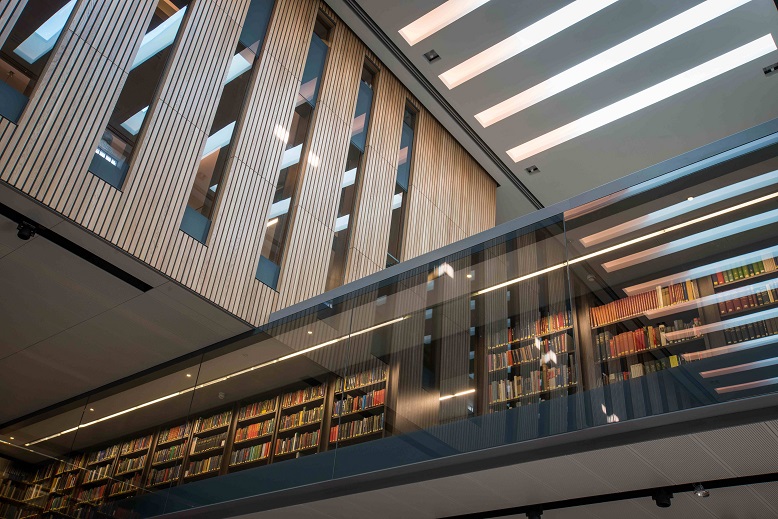 Half the shortlist are education buildings, with one client, the University of Oxford, responsible for an unprecedented two of the six projects. The Blavatnik School of Government, a contemporary new building in a conservation area takes the traditional Oxford quad and tears up the rule book; Herzog & de Meuron have created a succession of wide twisting staircases, offset balconies and communal spaces that encourage greater debate and interaction for aspiring civil servants and politicians. Elsewhere in Oxford, WilkinsonEyre have opened up the Bodleian’s Weston Library to the world. This Giles Gilbert Scott Grade II listed gem was once rather insular but has been transformed by a bold new glazed mezzanine to reveal to the public the treasures contained inside. In Glasgow, the city benefits from a bold statement about the importance of civic education with the addition of City of Glasgow College, Riverside Campus; the architects Michael Laird Architects & Reiach and Hall Architects have created a new icon on the Glasgow skyline with a campus anchored by two generous civic spaces, a cloistered garden and grand hall.

Newport Street Gallery in Vauxhall is the new home of artist Damien Hirst’s private collection. Three Victorian workshops that were once used to create sets for West End productions have been bookended by Caruso St John’s new buildings; the five buildings now joined together seamlessly to create superb gallery spaces and a beautifully curated new street.

Trafalgar Place, the first results of the wholescale redevelopment of Elephant and Castle’s 1970s Heygate Estate, are on the shortlist. Here dRMM Architects have designed a flagship development of 235 high density, high-quality homes set amongst retained mature trees and extensive landscaping; bringing a sense of tranquillity to a very urban location. Clever use of brickwork gives the new buildings an identity of their own; eight types of brick have been used, each one chosen to reference neighbouring buildings.

Outhouse by Loyn & Co is the first private house to feature on the RIBA Stirling Prize shortlist for 15 years (The Lawns by Smerin Architects was shortlisted in 2001). An exemplary concrete house on the Welsh borders, designed for a couple of retired artists, it delights with unexpected spaces, some underground, with a field as the roof. The architect’s use of light, air and vistas make the absolute most of its sloping site and wide views.

Speaking about the shortlist RIBA President Jane Duncan said “The RIBA Stirling Prize is awarded to the building that has made the biggest contribution to the evolution of architecture in a given year.

“Every one of the six buildings shortlisted today illustrates the huge benefit that well-designed buildings can bring to people’s lives. As seen at Trafalgar Place and Newport Street Gallery, they can breathe life and kick-start regeneration in neglected urban pockets to create new, desirable destinations and communities; as with Blavatnik School of Government, Weston Library and City of Glasgow College, they can give cities and institutions a new landmark to delight and draw in visitors, improve education potential, and increase civic pride. Meanwhile Outhouse provides a fantastic model for a private house – one that delights its owners and responds exceptionally sensitively to its treasured rural position.

“With the dominance of university and further education buildings on the shortlist, it is clear that quality architecture’s main patrons this year are from the education sector. I commend these enlightened clients and supporters who have bestowed such remarkable education buildings. Sponsors, such as the Blavatnik Family Foundation, the Garfield Weston Foundation, and Damien Hirst are continuing in the proud history of private patronage of architecture, and their continued support contrasts the slump in publicly-funded architecture.

“The shortlisted projects are each fantastic new additions to their individual locations – on an urban street, a city riverside, an estate regeneration, an historic city centre and a hidden part of the countryside – but their stand-out common quality is the inspiration they will bring to those who study, live, visit and pass by them, for generations to come. To me, this shortlist reflects everything that is great about UK architecture – a blend of experimental, artistic vision and a commitment to changing people’s lives for the better.”

The winner of the RIBA Stirling Prize will be announced on Thursday 6 October 2016.

The Architects’ Journal is the professional media partner for the RIBA Stirling Prize.

Use #StirlingPrize in your social media posts about the shortlist.

Backing the Best of Office Architecture

Realising the design potential of Tilebrick