All News
You are here: Home1 / All News2 / Building News3 / Will 3D printing spark another industrial revolution? 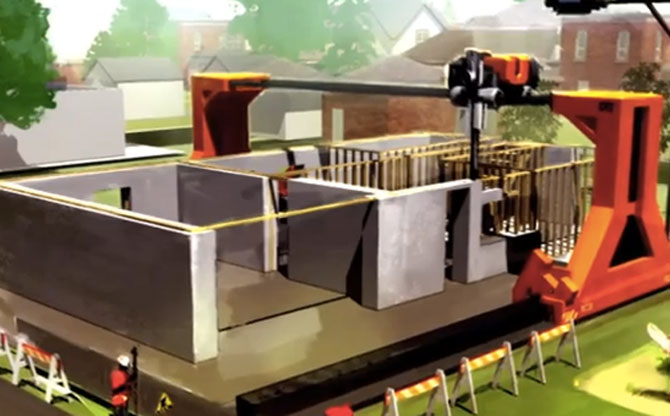 First we saw hand-production methods, with highly skilled craftsmen wielding untold knowledge and expertise over the structural properties of material and the best way to implement them within a design. Then the industrial revolution changed everything, with machinery and complex equipment trumping traditional handiwork. As the digital age ticks on and technologies such as 3D printing ever improve, is the construction industry on the brink of yet another industrial revolution?

Development of 3D printing actually began in the 1980’s, however it wasn’t until around 2010 that the technology experienced a paradigm shift in opinion regarding its usefulness. Initially considered ‘newfangled,’ expensive and improbable to take off, the process of 3D printing soon began to grab the attention of avant garde architects, designers and progressive construction professionals worldwide.

In contributing to the built environment, 3D printing has thus far been used to create small, complex components to be implemented in a hybrid design of new and old methods and even to ‘print’ entire buildings. Chinese materials firm Yingchuang New Materials recently produced 10 3D-printed buildings in just 24hrs, using a custom-built printing machine that outputs layers of construction waste mixed with cement. See video below:

With government aims to end the housing crisis within a generation, could 3D printing exponentially shorten the ETA?

Other technologies that are rapidly developing within the sector are also abetting a future that will lean heavily towards 3D printing. Industry-wide use CAD and the rise in usage of building information modelling (BIM) in particular will enable greater use of 3D printing, as much of the information necessary to create a building via computer aided manufacturing will exist as a result of the design process.

3D printing would allow faster and more accurate construction of complex structures and components, whilst simultaneously lowering labour costs and waste production. It might also enable construction to be undertaken in harsh, dangerous environments previously unobtainable by a human workforce – expanding our horizons.

As well as a wealth of positives, there are equal concerns regarding a 3D printed future. Systemised construction has never been highly successful in the UK. There was a brief boom in panelised systems for high-rise apartment blocks and pre-fab housing following the Second World War, but frankly they were ugly, lacked character and were plagued with condensation problems.

Printers could also pose a threat to the existing workforce, reducing employee numbers throughout the industry, as ostensibly the 3D printer could do the majority of the work.

Watch: How London’s skyline will evolve if the 250 high rise towers planned or underway in the capital go ahead as planned!

Currently, only a limited number of materials can be used, since the same printer might not be able to print the required multiple materials to deliver the rich and diverse built environment we all need to thrive. In addition, utilising the technology on a building site would require expensive and complex equipment, and whilst it is possible to envisage using some simplified version to manufacture specialist components on a more industrial scale, it remains debatable as to whether the method would offer an attractive return in comparison to bricks and mortar.

Obviously 3D printing has infinite potential in a wide variety of areas outside of construction, such as creating clothing, instruments, prosthetics, art, food, tools and – controversially – weaponry; to name but a few examples. As it becomes easier for businesses to transmit designs for new objects around the globe via the medium of internet, the need for freight services, manual skills and traditional manufacturing and transport techniques might deplete massively. This would result in an entirely different culture; a society free from import and export which could ultimately make or break entire global economies.

American economist and Nobel Prize winner Michael Spence says “the world we are entering is one in which the most powerful global flows will be ideas and digital capital, not goods, services, and traditional capital. Adapting to this will require shifts in mind-sets, policies, investments (especially in human capital), and quite possibly models of employment and distribution.”

Rome wasn’t built in a day but perhaps one day it could be printed in one. We just may be on the brink of the next chapter in our commercial and industrial history, will you say “viva la revolución” or do you stand as a proud Luddite, protecting our current way of life against the influx of technology that could serve as a blight to us as a species?

What are your thoughts on 3D printing? Let us know in the comments section below!

UK can be a world leader in digital transformation of infrastructure