All News
You are here: Home1 / All News2 / General News3 / UK Designs on Hollywood 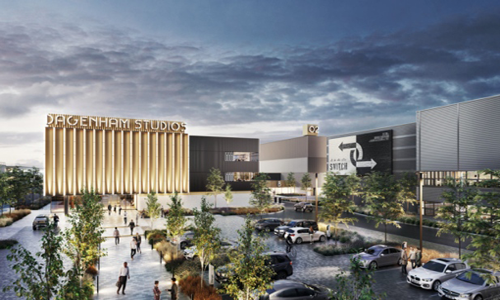 Be First have submitted plans to Barking and Dagenham Council’s regeneration organisation to transform a redundant factory site into a UK film study to rival Hollywood. The designs for the Dageham Studios are expected to be considered by the town hall’s planning committee chiefs in July.

Cllr Darren Rodwell, leader of the local authority, said: “This is a crucial stage in our ambition to make Dagenham London’s Hollywood. Our dream of making the area as famous for films as it was for Fords is very much on track.

“The new studios will be a game-changer in bringing thousands of jobs to Dagenham.

“Dagenham is already becoming known as a new hotspot for digital and knowledge-based industries with a huge data centre under construction and the UCL PEARL research centre set to be built just a stone’s throw away from the studios’ site. It’s another sign that Dagenham’s star is rising.”

The plans feature six, large sound stages equivalent to 140,000 sq ft, 85,200 sq ft of offices, and 174,500 sq ft of workshops. The designs have been hailed by Be First as being of a high environmental standard.

Pat Hayes, Be First managing director, said: “Our consultancy team has worked hard to submit exciting plans for what will be the most modern and largest studios to be built in the capital in the last 25 years.

“Given the high demand for studio space in the UK, I am confident that ambitious movie makers, production companies and studio operators will be very attracted by these proposals.”

Adrian Wootton OBE, chief executive of Film London and the British Film Commission, said: “The UK screen industries are enjoying an exceptional boom time and it is crucial that we capitalise on this by continuing to develop our world-class infrastructure and provide access to as much purpose built studio space as we possibly can.

“I am therefore delighted to see the Dagenham studios proposals moving forward so positively with such ambitious and cutting-edge designs that will further bolster London’s studio offer.”

Chris Berry of Lampton Smith Hampton, who have been working with Be First on the film studios project, said the planning application is another step forward in an exciting project, demonstrating the council’s commitment to the sector.

“We are delighted to be associated with it,” he said.

The studios would be built on the former Sanofi site off Rainham Road South.