All News
You are here: Home1 / All News2 / General News3 / THE BAHAMAS: THE BATTLE TO REBUILD AFTER HURRICAN DORIAN 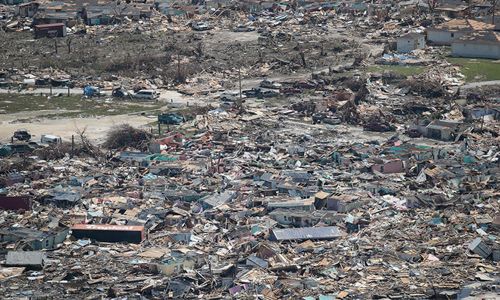 As the Bahamas begins its long recovery process after Hurricane Dorian ravaged Grand Bahama and the Abaco Islands, the country faces an uphill battle rebuilding hotels and its tourism industry.

“The Bahamas is the most tourism-dependent country in the Caribbean and perhaps the world,” said Rick Newton of Resort Capital Partners, a Charlotte, North Carolina-based real estate investment advisory firm focused on the resort and hospitality market in the United States, the Caribbean and Latin America.

Tourism accounts for about 50 percent of the country’s gross domestic product, according to the Bahamian government’s website, and most of the nation’s workers are employed in some aspect of tourism, as well.

The dependance on hotels and tourism makes the rebuilding process even more difficult for the Bahamas, after the hurricane made landfall over Labor Day weekend, bringing wind speeds of more than 180 miles per hour to two of the country’s largest population centers, Grand Bahama and the Abacos.

The hurricane, fortunately, missed the country’s capital city Nassau, along with Paradise Island, where the largest resorts and hotels are located, including Baha Mar and Atlantis, Paradise Island.

Frank Comito, CEO of the Caribbean Hotel and Tourism Association, said the hotels and resorts in Nassau were not impacted by the hurricane and never closed.

The Abaco Islands and Grand Bahama have a much different hotel landscape than Nassau.

“They have a large vacation home business. A lot of it is rental and timeshares and lot of single-family, high-end homes in the Abacos,” Comito said.

The Abaco Islands and Grand Bahama have a total of about 2,250 hotel rooms, which equates to 15 percent of the total hotel inventory in the country, according to Newton.

Recently the Bahamas has experienced a boom in its hotel industry, growing at a much faster rate than the rest of the Carribean.

The sizable upswing was due to the completion in 2018 of Baha Mar, a 2,300-room resort and casino.

Experts say that as repair and construction companies start heading to the affected islands in the Bahamas, hotels in Nassau and other nearby areas could see a bump in revenue and occupancy as repair workers need a place to stay.

After Hurricane Irma damaged parts of the Florida Keys in September 2017, the Miami region saw double-digit increases in occupancy, revenue and demand. In October 2017, Miami area hotel occupancy was at 74.5 percent, up 11.2 percent from the same month of the previous year.

Rebuilding in the affected areas in the Bahamas, however, is likely much more challenging than after a hurricane in the Keys or South Florida. In the Bahamas, there are only a few institutionally owned properties in Abaco Islands and Grand Bahama that can afford to make repairs and rebuild dilapidated hotels, according to Newton.

Similarly, the Bahamas can’t tap into federal resources to rebuild infrastructure, like Puerto Rico did after hurricanes Irma and Maria. Following the hurricanes, Puerto Rico quickly sought to take advantage of the Opportunity Zones program.

The federal program designated almost the entire territory of Puerto Rico as an Opportunity Zone, which means that investors who build new real estate projects or redevelop an existing property could get substantial tax breaks. The Island’s governor said that the program could bring more than $600 million in new investment to Puerto Rico, and some investors are already taking advantage of this tax benefit.

In the Bahamas, however, it’s hard to see this same scenario playing out, according to Newton.

Real Estate Investment Trusts will likely be hesitant to put money into the Bahamas, because there is less of an exit strategy than putting the money into the United States, he said. So the bigger question is who will pay to rebuild properties that are torn down?

”Where will the capital come from?” he asked. “It’s not coming from insurance companies. I hope it’s private capital.”

Did Sajid miss his big moment?
Scroll to top