Clean, green offshore wind is set to power more than 30% of British electricity by 2030, Energy and Clean Growth Minister Claire Perry has announced with the launch of the new joint government-industry Offshore Wind Sector Deal.

This deal will mean for the first time in UK history there will be more electricity from renewables than fossil fuels, with 70% of British electricity predicted to be from low carbon sources by 2030 and over £40 billion of infrastructure investment in the UK.

This is the tenth Sector Deal from the modern Industrial Strategy signed by Business Secretary Greg Clark. It is backed by UK renewables companies and marks a revolution in the offshore wind industry, which 20 years ago was only in its infancy. It could see the number of jobs triple to 27,000 by 2030.

The deal will also:

Claire Perry, Energy & Clean Growth Minister said “This new Sector Deal will drive a surge in the clean, green offshore wind revolution that is powering homes and businesses across the UK, bringing investment into coastal communities and ensuring we maintain our position as global leaders in this growing sector.

“By 2030 a third of our electricity will come from offshore wind, generating thousands of high-quality jobs across the UK, a strong UK supply chain and a fivefold increase in exports. This is our modern Industrial Strategy in action.”

The Co-Chair of the Offshore Wind Industry Council and Ørsted UK Country Manager for Offshore, Benj Sykes, said “Now that we’ve sealed this transformative deal with our partners in government, as a key part of the UK’s Industrial Strategy, offshore wind is set to take its place at the heart of our low-carbon, affordable and reliable electricity system of the future.

“This relentlessly innovative sector is revitalising parts of the country which have never seen opportunities like this for years, especially coastal communities from Wick in the northern Scotland to the Isle of Wight, and from Barrow-in-Furness to the Humber. Companies are burgeoning in clusters, creating new centres of excellence in this clean growth boom. The Sector Deal will ensure that even more of these companies win work not only on here, but around the world in a global offshore wind market set to be worth £30 billion a year by 2030.”

Keith Anderson, ScottishPower Chief Executive, concluded “ScottishPower is proof that offshore wind works, we’ve worked tirelessly to bring down costs and, having transitioned to 100% renewable energy, will be building more windfarms to help the UK shift to a clearer electric economy. Two of our offshore windfarms in the East Anglia will replace all of the old thermal generation we’ve sold and we are ready to invest more by actively pursuing future offshore projects both north and south of the border.

“We have a fantastic supply chain already in place in the UK, from businesses in and around East Anglia to across England, across Scotland as well as Northern Ireland. The Sector Deal will attract even more businesses in the UK to join the offshore wind supply chain and we are excited to see the transformative impact this will have on our projects.”

In addition, the deal will:

The cost of new offshore wind contracts has already outstripped projections and fallen by over 50% over the last two years, and today’s further investment will boost this trajectory, with offshore wind projects expected to be cheaper to build than fossil fuel plants by 2020. The Deal will see UK continuing as the largest European market for offshore wind, with 30GW of clean wind power being built by 2030 – the UK making up a fifth of global wind capacity.

The UK is already home to the world’s largest offshore wind farm, Walney Extension off the Cumbrian Coast, and construction is well underway on projects nearly double the size. Around 7,200 jobs have been created in this growing industry over the last 20 years, with a welcome surge in opportunities in everything from sea bedrock testing to expert blade production.

The Deal will look to seize on the opportunities presented by the UK’s 7,000 miles of coastline, as the industry continues to be a coastal catalyst for many of the UK’s former fishing villages and ports. Increased exports and strengthened supply chain networks will secure economic security for towns and cities across the UK.

Wind output in November broke through the 100% threshold for the first time, with 109% of total Scottish electricity demand being met from renewables, enough to power nearly 6 million homes.

Another milestone is that for 20 out of the 30 days, wind production outstripped demand.

Gina Hanrahan, Head of Policy at WWF Scotland said “Wind power breaking through the magic 100 per cent threshold is truly momentous. For months output has flirted around the 97 per cent mark, so it’s fantastic to reach this milestone.

“It’s also worth noting that 20 out of 30 days wind production outstripped demand.

“Most of this is onshore wind, which we know is popular, cheap and effective. But the UK Government needs to allow it to compete with other technologies, by unlocking market access for onshore wind if it’s to realise its full potential.” 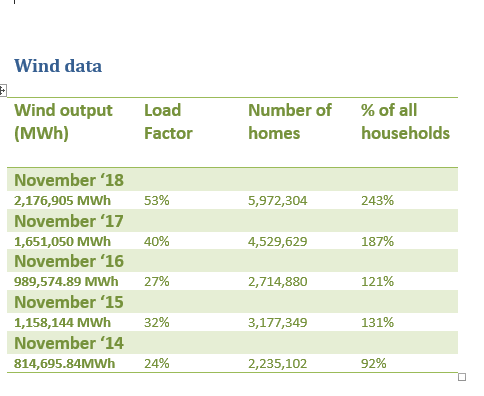 Activity in the offshore windfarm sector reached a record high in 2016, as the total construction value for projects reached £4.1 billion, increasing from £2.45 billion in 2015.

According to the latest data from construction industry analysts Barbour ABI, offshore windfarms alone accounted for 42 per cent of UK construction contract value in the utilities and power sector and 21 per cent of the entire infrastructure sector. This trend is likely to continue with the pipeline for future offshore wind developments looking healthy, with Barbour ABI reporting that £23.2 billion pounds worth of construction contract value is in planning. 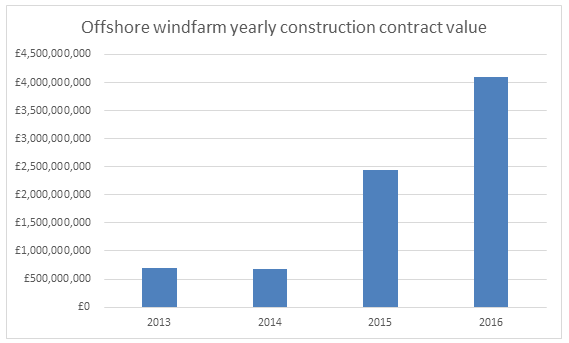 Three major projects that made a significant difference to the increase in construction contract value for offshore wind farms in 2016 were the Beatrice, Galloper and East Anglia one offshore wind farm projects, together worth a combined £3 billion pounds, which once constructed will produce over 1,600 MW of renewable energy per hour.

Commenting on the figures, Michael Dall, lead economist at Barbour ABI, said: “Back in 2013 offshore windfarms accounted for only 7.5 per cent of the annual construction value for the utilities and power sector, which increased to 42 per cent in 2016, on the back of significant investment in this type of project.

“With reports showing that the cost of producing electricity in this way have fallen significantly, the increase in construction value makes sense.”

“We have also seen a large uptake in the planning pipeline for future offshore windfarms with £23.2 billion worth of construction planned over the coming years, suggesting this burgeoning sector will continue to expand in 2017 and beyond.

Wind turbine towers are set to reach heights of up to 170m with new construction techniques and materials, according to wind power engineering specialists K2 Management. Tower heights have grown steadily over the last decade as operators seek stronger wind speeds higher up in the atmosphere.

Based on work with various clients across the globe, K2 Management believes new technology developments like modular concrete structures mean turbine heights are likely to soar to up to 170m in the coming years – higher than London’s ‘Gherkin’, and almost as high as the Eiffel Tower. This compares to the tallest towers of 150m at present. There has been a 48% increase in average hub height since 1999, and based on its experience in the industry and its partnerships, K2 Management has insight on how to manufacture hybrid tower concepts up to 170m.

According to K2 Management wind resource experts, a 3 MW turbine located in a forest area for example, with an average wind speed of 6 meters per second, will meet 13 percent more wind speed if the turbine height doubled from 70 to 140 meters. Annual energy yield prediction would increase by almost 30 percent because of less surface aerodynamic drag and the viscosity of the air.

Therefore, going up to 170 meters from 70 meters will boost energy yield prediction by 35 percent on average. The more complex the terrain – for instance forests, hills, mountain, buildings – the larger the impact is in using taller turbine towers.

K2 Management CEO Henrik Stamer says “170m towers could become a common sight in the near future in markets like the USA and Germany as part of a new renewable skyline. We expect to see more of these mega designs as we help our clients get the most out of their wind projects.”

Through its network of experts across the globe, K2 Management possesses a unique vantage point overlooking the wind industry, allowing for a view into emerging trends. The Company is able to draw on this wide breadth of experience to identify ways of making wind projects more efficient.

Stamer adds: “As a company that is at the global cutting edge of technology we are helping push the limits of the wind industry in terms of power generation efficiency, cost-effectiveness and return on investment; and these new mega wind turbine towers are a case in point.”