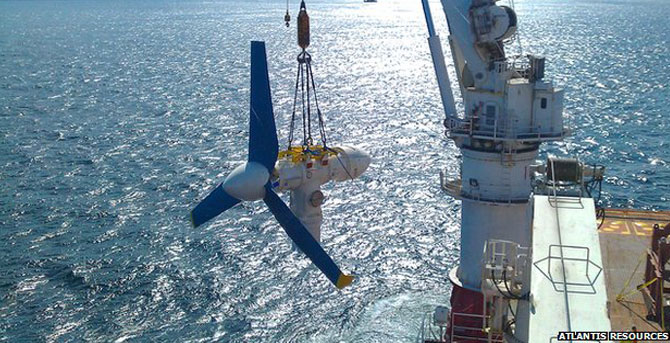 The MeyGen tidal stream project is undoubtedly spearheading the worldwide development of marine energy. When completed, it will harvest the tidal potential of one of the most energetic sites in Europe.

Atlantis Resources have today announced that they have managed to raise an additional £5m towards the project, as a result of placing 12.5 million shares on sale. (The £51m project was unveiled last month.)

The profit gained from new investors will help push the project into the construction phase, in a bid to create the world’s first commercial scale multi-turbine tidal energy project to come on stream. These initial stages will involve installing four 1.5MW turbines on the seabed. MeyGen ascertain that eventually the site could house up to 269 turbines – with potential to generate a total of 398MW; enough energy to power 40,000 Scottish homes.

The lease on the site was agreed with the Crown Estate last month. Located in Scotland beneath the channel (Inner Sound) between the island of Stroma and the north easterly tip of the mainland, the boundaries contain 3.5km² of fast moving water.

Once up to speed, MeyGen tidal stream project will make a critical difference in Scotland, reducing climate emissions and phasing out polluting fossil fuels and nuclear power. This £5m gained from share sales will certainly help lower Scotland’s carbon footprint and help the company to continue making waves in the renewable energy industry.

HS3 on track
Scroll to top