All News
You are here: Home / All News / Building News / Park it… with Creagh 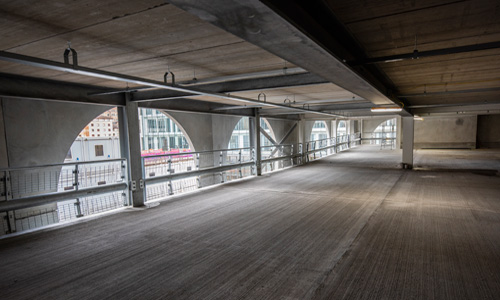 Creagh, one of the UK’s largest producers of concrete products for a range of market sectors are changing the way people think about concrete, bringing new levels of efficiency and performance to their products. This can be seen in one of their latest projects, Circle Square. MMC Editor Joe Bradbury discusses:

Work is well underway on a new multi-storey car park and hotel at Circle Square in Manchester city centre.

Originally, architecture was never delivered with car parking in mind. However, as cars became accessible for everybody, the popularity of cars rose exponentially. This has dominated design ever since, with the built environment having to morph and evolve around an infrastructure of roads, motorways, garages, car parks and multi storey’s.

Over the years, attitudes towards car parks (especially multi storey) have been in a constant state of flux. People often debate the heritage value of the post-war multi-storey car park, typically constructed out of concrete in a brutalist style. Some believe that these car parks are a blot on our horizons, whilst others campaign to get them listed status in order to protect their architectural value. The Tricorn in Portsmouth is one such example of where demolishment causes controversy, due not only to its aesthetics but also its cultural value; it famously featured in the 1971 film ‘Get Carter.’

Wider adoption of modern methods of construction, such as offsite, are now serving to revolutionise the humble car park even further, making it fit for modern demand.

Offsite construction provides specifiers with programme certainty and quality though simplification of site operations and reduced weather dependencies due to the controlled factory-based assembly process. Buildings delivered through offsite construction offer enhanced specification standards and build quality which reduces occupancy costs related to energy use, defects and repairs. There is significant evidence that suggests that the use of offsite construction has been successful when applied to meet the needs of significant developments at scale with consequential opportunities for standardisation of design details – particularly to meet the need of government led programmes.

‘The Waste and Resources Action Programme’ posit that offsite construction practices generate up to 90% less waste than more traditional building methods. This is because a factory is a much more controlled environment than a traditional building site – throwing far fewer variables into the mix.

Russells Construction has been appointed by developer Bruntwood as main contractor for the delivery of the project. Creagh have been enlisted to manufacture, supply & fit stair cores, hollowcore flooring and bespoke inset brick panels.

The first ten floors of the 16 storey hybrid building, will encompass a 1,014 space car park, with a 158 bed hotel located on top of the car park.

The aerial images show the size of the site, with the concrete cores, supplied by Creagh and steelwork structure showing the scale of the large development underway.

Feilden Clegg Bradley Studios served as concept architect for the car park and hotel, with the design reflecting the city’s industrial past. Inspired by the nearby 19th century warehouses, the building will be constructed from a pre-cast concrete panel system, utilising inset bricks (supplied by Creagh) which draw on Manchester’s rich links to the grand infrastructure of the Victorian era.

Located on the former BBC site on Oxford Road, Circle Square is a joint venture between Bruntwood SciTech and Select Property Group that will see the creation of a pioneering new urban destination that will boast over 1700 new homes, 1.2 million sq. ft. of workspace and over 100,000 sq. ft. of retail and leisure space. Circle Square will also feature the first and largest new city park for generations, providing much needed green space in the city.

Offsite offers fast and affordable solution to meet modern demand, and with the UK Environment Agency and other government bodies putting increasing pressure on construction companies to reduce pollution and conform to environmental regulations, it is a shift in practice that happens regardless of anybody’s stance on the subject. Companies such as Creagh are at the forefront of this great change.

The Logic of Offsite Manufacturing