All News
You are here: Home1 / All News2 / Building News3 / Leith to Welcome 97 New Affordable Homes at Destination Development 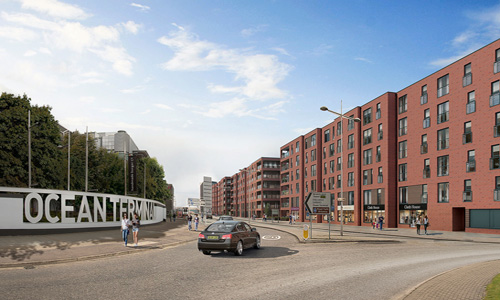 WORK is set to start on urgently-needed affordable homes in a prime Leith location thanks to the efforts of three locally-based organisations.

After steering the entire project through the planning process and completing enabling works, CALA Homes (East) in partnership with Hart Builders (part of Cruden Group) will construct the affordable homes.

Comprising four three-bedroom, 58 two-bedroom and 20 one bedroom properties, the homes will be handed over to Port of Leith Housing Association (PoLHA) with the first tenants moving in by May 2021.

Half (41) of the affordable apartment homes will become social housing with the other half allocated for mid-market rent (intended for people who would not qualify for social housing and find full open market rents unaffordable).

Craig Lynes, Land Director at CALA Homes (East), said: “These homes are an important element of Waterfront Plaza, a project that is fast becoming one of the most exciting new communities in the city.

“With Golden Share and both social housing and mid-market rent included alongside the range of private homes, we are confident that this development will meet the needs of the growing and diverse local market.

“We’re delighted to be playing our role in the provision of affordable homes in such a vibrant, exciting part of town.”

Later this year it will pass a milestone of 600 on-site affordable homes delivered in the Edinburgh area, as it progresses work at its Boroughmuir High School in the south of the city.

Jason Steele of the Cruden Group, said: “We are thrilled to strengthen the Cruden Group’s relationship with both CALA and Port of Leith Housing Association through the delivery of the Affordable homes at this exciting mixed tenure development.

“Construction is now underway at Waterfront Plaza and we’re delighted to play an integral role in yet another important milestone towards achieving the Scottish Government’s target to deliver 50,000 Affordable homes by 2021.

Keith Anderson, Chief Executive of Port of Leith Housing Association, said: “We are looking forward to providing these high-quality, affordable homes which will breathe new life into this part of Leith and help to create a new community there.”

Despite being initially recommended for refusal due to historic zoning for a commercial-led scheme, the brownfield site was unanimously backed by Councillors after receiving strong support by local community leaders, businesses and politicians.

A number of those supporters, including Councillors Adam McVey (SNP) and Gordon Munro (Labour) – as well as representatives from Forth Ports, visited the wider development in recognition of work starting in November 2018.

Speaking at the time, Local Councillor and City of Edinburgh Council Leader, Adam McVey, said: “This development has a strong sense of place and strong understanding of Leith.

“I’m delighted that such a prominent patch of land in Leith which has been brownfield for so long is finally getting a development our community can be proud of.”

The private homes at Waterfront Plaza by CALA Homes (East) officially opened on Saturday 13th July, with the major housebuilder seeing 16 early reservations and over 200 site visitors in the first two weeks alone.

CALA Homes is headquartered in Scotland and employs more than 850 people and earned its reputation on the high quality of the homes it builds, which are sensitively designed to augment the areas in which they are located.

The result is homes that are highly sought after and which retain their value over decades, earning loyalty from owners, who often live in a series of CALA properties.