All News
You are here: Home1 / All News2 / Product News3 / Gradus and Groundwork partner to dispel Urban Myths 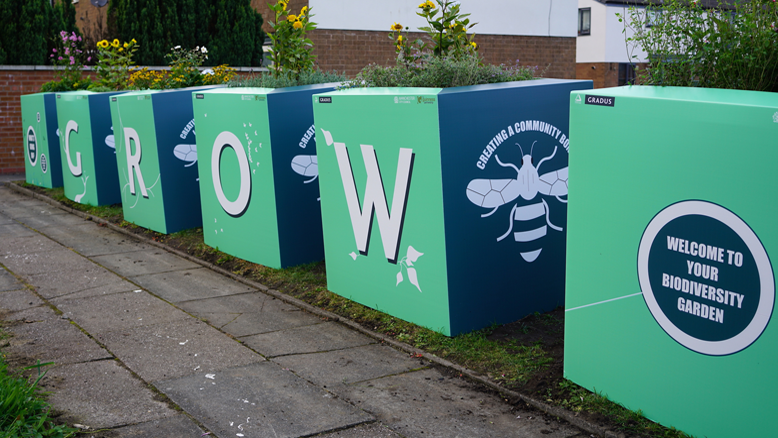 When contract interior specialist, Gradus, launched a new design-led, contemporary carpet range called “Urban Myth”, they took the opportunity to take on some ‘urban myths’ within their own community in nearby West Gorton, Manchester.

Working in partnership with leading communities charity, Groundwork; Manchester City Council and The Guinness Partnership, Gradus provided an opportunity for the local community to have hands-on involvement in the creation of a pollinator garden; large containers filled with a diverse collection of pollinating flowers. The purpose of the mobile biodiversity initiative is not only to increase the biodiversity of the residents’ local environment, but also dispel the myth that people don’t value green spaces.

Anthony Roberts, Group Marketing Communications Manager, at Gradus explains: “There is a misconception that urban communities such as those here in West Gorton, don’t value the green space or green initiatives. However, as we’ve witnessed, that is far removed from reality.

“A project like this helps to transform all-too-rare green spaces and by ensuring that a variety of plants are chosen, we can breathe new life in to these areas. We’re also able to create multi-functional, multi-purpose green spaces that appeal to all members of the local community.

“As a manufacturer that works closely with architects, we understand that the role of the architect and architecture is changing. RIBA’s update to its ten mandatory CPD core curriculum topics highlights social purpose as integral to the role and responsibility of architects. Architecture for social purpose is about understanding the social value and economic and environmental benefits that architecture brings for individuals and communities. The project at West Gorton is an exemplar of that, this resonates on a much deeper level, enhancing social spirit and fostering cohesion within the community.”

Gradus worked closely with Groundwork, a charity active in the West Gorton community, to make the mobile biodiversity initiative a reality and as Julie Hyslop, Senior Project Officer, adds: “Through our work and projects like this, we’re able to maximise the space available and engage the local community at the same time. Here in West Gorton, we’ve seen school children of every age passionate about the garden’s creation and its ongoing upkeep, whilst older residents have been enthused at the chance to get to know their neighbours better and spend more time with them.”

Local residents were actively involved in the creation of the containers in which the plants have been arranged. They are wrapped with a variety of educational messages to reinforce both the value of the garden’s creation and its ongoing contribution to the local community.

Anthony concludes: “We’re looking forward to seeing how the project we’ve created here is cared for and enjoyed, as well as the contribution it makes to strengthening the local community. It has certainly dispelled the myth that such initiatives aren’t valued, and we very much hope to work in other areas of the UK to similarly make a difference.”

More information can be found about Groundwork’s community work within Greater Manchester at http://groundwork.org.uk/Sites/msstt/

Gradus step up to the mark at the University of Derby