All News
You are here: Home1 / All News2 / General News3 / Electrifying the subsea industry 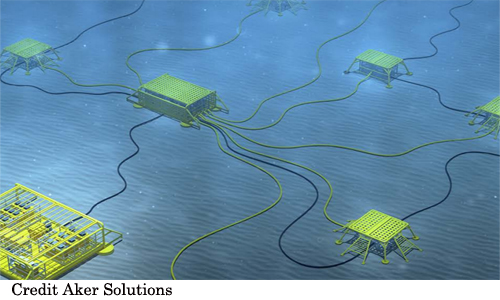 As the offshore industry’s carbon footprint continues to grow, more subsea companies are looking to partial and total electrification as a means to cut costs and reduce environmental impacts. JP Casey looks at four electrification projects in the subsea sector.

In 2017, Oil & Gas UK reported that the UK offshore industry’s carbon footprint had grown, with upstream operations producing 15.7 million tonnes of CO₂, a 7% increase on 2016 figures. Meanwhile, Shell reported an increase in operating expenses from $9.7bn in the first quarter of 2018 to $10.2bn in the year’s final three months, raising both environmental and financial concerns about the sustainability of offshore operations.

This uncertainty has encouraged offshore companies to invest in cleaner, more efficient technologies, from sealed underwater cables to repair tools. Total has led the way in electrification, unveiling the world’s first all-electric subsea operation three years ago, and could prove to be an example for others in the industry to follow.

Following over a decade of research and development, and eight years of effective electrified Christmas tree valve operation, the K5F-3 well began commercial production in 2016. Located in the North Sea, Total is hopeful that the well will deliver a number of benefits, beginning with financial savings. The company claims that the construction of all-electric wells will reduce capital expenditure costs by up to 40% compared to traditional wells, and while the Aberdeen branch of the Society of Petroleum Engineers reported in 2017 that the well had secured savings of up to just 15%, this remains a positive development.

The well also boasts a number of safety benefits. In traditional wells, hydraulic fluid flows from a facility above the surface of the water into a subsea well through specialised pipes, which is used to power the well’s hydraulic equipment, which pumps the oil back to the surface. By electrifying the system, high-pressure equipment such as the hydraulic pipes are removed, reducing the risk of explosions arising from faulty pipes, and eliminates the threat of a pipe leaking, and spilling hydraulic fluid into the surrounding ocean.

All of the component parts of the K5F-3 well have been tested up to depths of 3km below the surface, and Total is hopeful that the system will become the industry standard for subsea wells at that depth.

While Total has been able to develop its own bespoke all-electric well, equipment manufacturer ABB has worked to develop solutions that can be applied to a number of rigs and facilities across the offshore industry. The company’s INSUBSEA system is an attempt to supply reliable electric power to oil and gas reservoirs, which the company notes are found increasing distances and depths from shore and surface; the system consists of compressors and pumps built on the seabed up to 150km from topside infrastructure, which can supply power over greater distances than conventional cables.

The system has been effectively deployed at the Statoil-owned Åsgard project off the Norwegian coast, which relies on INSUBSEA for its power. The system transfers 15MVA at 189Hz over a distance of 43km, setting world records for distance, voltage and frequency between a seabed compressor and a floating facility. The entire Åsgard oil field has the capacity to produce up to 200,000 barrels of oil per day and the use of the INSUBSEA system demonstrates the effectiveness of electrified solutions at large-scale operations.

ABB’s system can also be used to reduce operational costs related to heating. A combination of low temperatures and high pressures in subsea pipes can lead to the formation of wax and hydrates, which block the pipes. ABB reports that the petroleum industry spends over $700m a year dealing with these blockages; by using an electrified system, ABB can prevent the formation of these blockers, cutting this cost without the use of potentially dangerous chemicals.

Based in the US, engineering services company Oceaneering is electrifying individual operations to improve its operational efficiency and environmental performance. The company has discussed a number of electrical tools, including manipulator arms, torque tools, cutting and cleaning equipment and sensors and probes, as it moves towards electrification of its equipment.

However, the company’s recent financial struggles could hinder future electrification efforts, with Oceaneering’s annual reports noting that the firm’s 2017 net income of $1.7m fell to a net loss of $2.1m in 2018. This was primarily caused by what president and CEO Roderick A Larson called a decline in ‘fleet utilisation’, with just 56% of the ROVs used in the third quarter of 2018, and 52% in the fourth quarter, and should the company have to cut operating costs, it is unlikely it will invest considerably in electrification.

Norwegian manufacturer Blue Logic provides a number of cables known as the Subsea USB connectors, as part of its electrical interface range of products. All of the connecting components of the cables are sealed inside an external housing, dramatically minimising the risk of short circuits and corrosion arising from components being in contact with water. The company also claims its ‘inductive transfer technology’ can improve the operational lifespan of the connectors by removing limits on the number of times the components can be disconnected and reconnected.

The cables come in three variants, dubbed A, B, and C, each a different size and providing different volumes of power. The C model, for instance, can deliver up to two kilowatts of power, alongside an 80mbps Ethernet connection for communication, compared to the A model, which can provide up to 60 watts of power. However, the A model is completely sealed from seawater, and so impossible to short circuit and completely corrosion-resistant.

The products are in keeping with the company’s ‘one subsea world’ vision, in which equipment and systems are standardised across the company, so components can work effectively with a range of other systems. While the company lacks the financial muscle to develop large-scale solutions or bespoke rigs, the cables provide a versatile and effective way of improving the performance and efficiency of subsea power transfer.