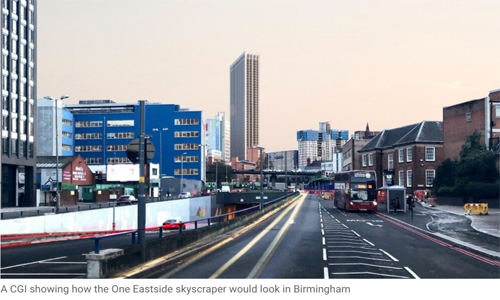 Court Collaboration’s application for the 51-storey One Eastside was deferred by the city council’s planning committee.

It was confirmed Birmingham Airport still maintain their objection that construction cranes could pose a danger to airplanes flying on a newly established flight path and have sought a further assessment.

The £160m development, on the former college and university campus site at Jennens Road and James Watt Queensway, would also include a 15/16 storey tower and separate pavilion building.

but the design of the tower in particular was questioned.

Councillor Gareth Moore said: “It’s 51 storeys, it’s incredibly tall, I don’t have an issue with that but given it’s going to be quite iconic because of it’s height it’s very much just a giant box, there isn’t anything interesting about it.

“There’s no intricate design or any kind of features that other tall buildings in Birmingham and elsewhere have.”

Attention then turned to the fact that only 20 of the scheme’s 667 apartments (three per cent) would be allocated as affordable housing.

“This has been marketed as a luxury building. It is known Birmingham has 35 per cent affordable housing (policy), perhaps that should be looked at from the very start of the design process.

“There’s a lot of marble on this, perhaps a little less marble and a few more affordable flats would be nice.”

But council officers who recommended the scheme be approved defended the proposal, which would ultimately be taller than the BT Tower.

City centre planning officer Jo Todd confirmed the council’s head of city design had concluded the scheme to be ‘acceptable’ and stated that the development would not be viable if it delivered any more affordable homes.

She confirmed that Birmingham Airport had requested a National Air Traffic Services assessment of the ‘saddleback’ cranes which Court Collaboration now propose to use for construction.

“The idea of a saddleback crane is that it does not extend above the tower itself. However they (the airport) have now confirmed they do still want that assessment which the applicant has commissioned and is seeking to demonstrate there would be no issue.”