All News
You are here: Home1 / All News2 / General News3 / Dubai’s crown jewel 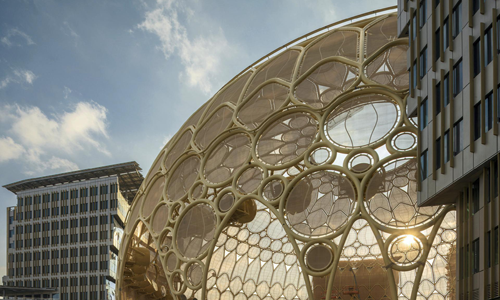 The steel trellis that makes up Al Wasl’s dome, with sand-coloured screens, has been fitted with more than 200 projectors and is wide enough to fit two Airbus A380s.

Al Wasl – meaning connection in English – is the World’s Fair centrepiece, connecting the districts, and will host its main ceremonies.

With this, Expo-led construction of permanent structures has been completed on the Dubai South site and testing of lighting has begun across the three main theme districts divided into Opportunity, Mobility and Sustainability zones.

All infrastructure and major landmarks – including fidget-spinner shaped Mobility Pavilion and the disc-shaped Sustainability Pavilion – have all been completed, expo officials said during a tour of the site on Monday.

“Al Wasl is really the jewel of the site because it will be the central hub,” said Katy Granville, who works with the Expo’s community engagement team.

“This is where the biggest celebrations will take place. When you see the crowned dome as you drive into work every day, it’s really a symbol of all the work being done and we are most proud of it.”

During the six-month expo, images will be beamed via projectors on to surface of the translucent dome and will be visible both within and outside the site.

The massive dome’s architectural design is linked to the country’s history and heritage. The outer cover resembles the world fair logo which was inspired by an ancient golden ring found in the Saruq Al Hadid site by Sheikh Mohammed bin Rashid, Vice President and Ruler of Dubai. Artefacts uncovered at the site date back to the Iron Age.

Meticulous and careful engineering precision was needed last year to raise hundreds of tonnes of moulded steel and fit the crown of the dome to the top of Al Wasl plaza.

With nine months until expo opens, on October 20, about 40,000 workers are on site operating cranes, transporting material and fitting out interior work.

Clusters of date palms have been planted in roundabouts and line several paths leading to the theme districts.

A media tour of the site on Monday showed work being completed on the iconic white UAE pavilion, the largest on the expo site, which resembles a falcon in flight.

Dozens of tourists and residents also gathered to be part of a tour of the sprawling area as part of the World’s Greatest Show in the Making Tour launched to familiarise people with the offerings.

Extensive work is under way on the Saudi Arabia pavilion that spans an area equal to two football pitches.

Surrounding Al Wasl Plaza is a 55-metre high observation tower where visitors will be able to catch a bird’s eye view of the site and Jubilee Park, one of the main green lungs that will host open-air concerts with a capacity for 15,000 people.

On another end of the 4.38 sqkm site, about 2,000 flats are being readied at the Expo Village for staff who must live on site for until the fair ends in April.

Hectic work was also under way in the winged metal structure of the emirate’s largest metro station. Part of the Roads and Transport Authority’s Route 2020 project, the station will connect the expo to the city’s main metro line and ferry more than 20,000 passengers every hour in each direction.

Chancellor may back HS2