All News
You are here: Home1 / All News2 / General News3 / Chancellor may back HS2 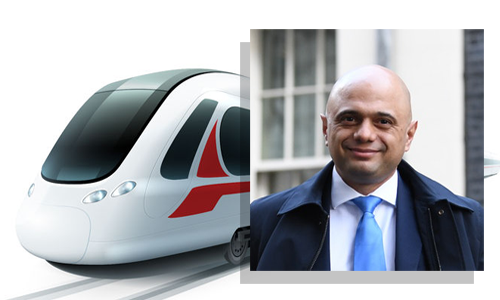 After reviewing costs and alternative plans, the chancellor is expected to support the scheme.

Chancellor Sajid Javid is set to throw his weight behind the controversial HS2 rail project.

Mr Javid is minded to support the high speed train initiative at a meeting with Prime Minister Boris Johnson and Transport Secretary Grant Shapps on Thursday.

The PA news agency understands that having reviewed costs and alternatives the Chancellor will “broadly back” the high-speed line from London to Birmingham, Manchester and Leeds.

Mr Shapps has insisted that no decision on the controversial infrastructure project – the biggest in Europe – will be announced this week.

The Prime Minister told the Commons on Wednesday that a decision on the project would be made “very shortly”.

Some £8 billion has already been spent on the scheme.

He said: “I just want to reassure all of my honourable friends and everybody, whatever persuasion they may be about HS2 across this Chamber, that there will be an announcement and a decision very shortly.”

The meeting comes as Mr Javid has put pressure on Cabinet colleagues to identify where cuts of 5% could be made in their departmental budgets.

In a letter, co-signed by Mr Johnson, the Chancellor urged ministers to identify projects that could be abandoned ahead of his first Budget as Chancellor in March.

The intervention was seen at Westminster as a bid to find resources to fund Tory election promises on infrastructure, health and law and order.

Whitehall’s spending watchdog said this month that HS2 is over budget and behind schedule because its complexity and risks were under-estimated.

The National Audit Office (NAO) warned that it is impossible to “estimate with certainty what the final cost could be”.

Phase One between London and Birmingham was due to open in 2026, but full services are now forecast to start between 2031 and 2036.

Business chiefs in the north of England have argued that pushing forward with HS2 is key to boosting transport links across the region and providing increased capacity on the overcrowded rail network.

Construction firms warn that scrapping it would cause major damage to the industry.

However, opponents insist HS2 is too expensive and the money would be better spent elsewhere, while several environmental groups say it would cause huge damage to natural habitats and ancient woodland.

FUNDING TO HELP HOUSE THE HOMELESS