All News
You are here: Home1 / All News2 / General News3 / Croydon Council – Residents say it ‘Stinks’

The Brick by Brick building site on Auckland Rise on Friday, where very smelly, brown water was emerging from a hole in the ground

Residents forced to step over and around what looks, and smells, like a stream of sewage

Residents in Upper Norwood have complained long and hard that they’ve been forced to put up with a inaction from Brick by Brick, the council-owned builders. But this week, they have been having to step over and around what looks, and smells, like a stream of sewage, pouring from a Brick by Brick building site on Auckland Rise.

Complaints to the council on Friday were immediately fobbed off, as the buck was passed to Thames Water – though the cause of the problem seems to be a broken drain, leaking on the building site.

The episode highlights again the absence of anything in the way of rigorous planning controls or enforcement by the council, the local planning authority, especially around sites where work is underway for the council-owned builders, Brick by Brick.

Eye-witnesses reported seeing no evidence of workmen on the site, which has been under development for almost three years. 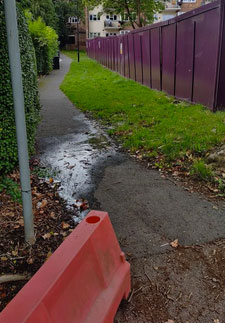 A smelly stream flows down a nearby footpath, used by children on their way to school

Said one concerned resident, “Considering Croydon Council closed off Auckland Road to make it safer for children to get to school, it’s very surprising that they appear to be letting sewage spill out from Brick by Brick’s own development site over footpaths and pavements and forcing people to walk into the road.

“Then they have the cheek for the council Twitter account to advise the public to call Thames Water on their behalf.”

According to contractors Quinn London, they are at present in dispute with their clients, Brick by Brick, over the long-delayed Auckland Rise development, where work has ground to a halt this year, apparently for reasons other than coronavirus.

A Katharine Street source said, “For an incident like this, involving a possible public health risk, you’d expect that council officials from planning control would make an immediate site visit to establish the cause and whether it could be addressed quickly.

“But it is becoming increasingly apparent that in Croydon, there is little or no effective planning enforcement – especially for certain favoured developers, including the council’s own builders, Brick by Brick.”

Croydon Council’s ’nuffink to do with us, guv’ response to the issue on Friday

Sources in the construction industry have suggested that, as cost overruns on some of Brick by Brick’s projects have built up, corners are being cut and some of the more expensive elements of developments that were included in the original planning application submitted to the council, and still listed on the planning portal, have been dropped.

Promised charging points for electric vehicles, part of Brick by Brick’s eco-friendly spiel, have never been installed on some sites, and other “green” features promised to be included with the “architect-designed” new homes have also been omitted.

Nowhere on the planning portal, though, is there any mention of Brick by Brick landscaping Auckland Rise with a previously undiscovered stream of brown-coloured water.

Long-suffering residents have been left hoping that there’s no heavy autumn rainfall in the coming days, which is sure to make an already smelly situation much worse.