All News
You are here: Home1 / All News2 / Product News3 / Offsite News4 / Creagh provide the solution for 2 new student accommodations 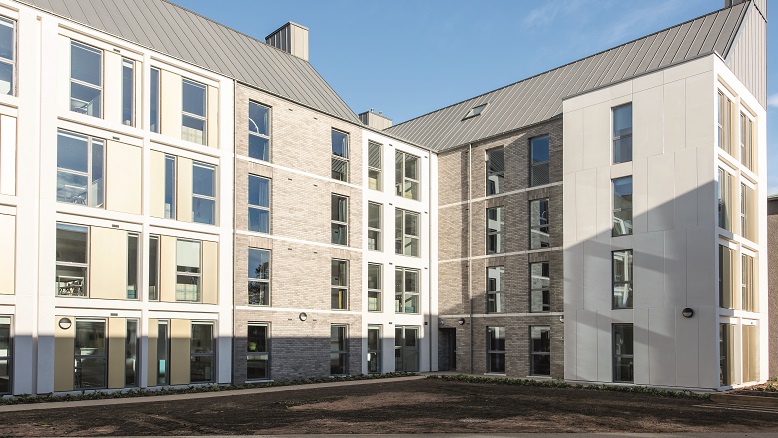 A building of historical significance

Founded in the 15th century, St Andrews is Scotland’s first university and the third oldest in the English speaking world. Teaching began in the community of St Andrews in 1410, and the University was formally constituted by the issue of a papal bull in 1413.

In 2009, St Andrews became the first Scottish ancient to appoint a woman as Principal, recruiting Professor Louise Richardson from the Radcliffe Institute, Harvard, to lead it into its seventh century. She was succeeded in 2016 by Professor Sally Mapstone.

St Andrews recently celebrated 600 years of continuous existence during which time it has made an enduring contribution to the intellectual and cultural life of both Scotland and the wider world.

The first stage of the investment called for two new accommodation buildings for the campus. The new buildings called Powell Hall and Whitehorn Hall respectively have created 389 new bedrooms for the university.

Creagh provided architectural concrete cladding for the buildings including feature walls with etched lettering. In total, Creagh installed 695 GFRC concrete pieces for both projects. Glass Fibre Reinforced Concrete or GFRC (also known as GRC) is a type of fibre-reinforced concrete. GRC consists of high-strength glass fibres embedded in a concrete matrix. Both fibres and matrix offer a synergistic combination of properties that cannot be achieved with either of the components acting alone. The fibres provide reinforcement for the matrix, increasing its tensile strength, limiting the shrinkage and creep processes as well as eliminating curing cracking appearance.

For the St Andrews project, Creagh developed a project-specific GRC mix to match both the structural performance and aesthetics requirements. This allowed the installation of floor to floor panels with 25mm concrete skin and no steel rebar. Creagh’s manufacturing facility rose to the challenge of precise filigree moulding and different casting techniques required for the panels. Among the benefits of GRC: it’s reduction in thickness provides an increased cavity and/or insulation allowance and a smaller loading to the façade. All of which significatively reduce the buildings carbon footprint but providing the same durability and resilience as traditional concrete.

Powell Hall opened its doors to postgraduate students for the first time in October 2018. It is named after Renee Powell, American professional golfer who became one of the first female members of the R&A in 2015 and was the second African -American woman ever to play on the LPGA Tour. The new building is five-storeys and adjacent to Agnes Blackadder Hall on the North Haugh, near the various science buildings. It is also located near to the Sports Centre and is only a 15 minute walk to the town centre.

Aluminium copings were also installed on Whitehorn building, a four-storey building located adjacent to University Hall, near to the Sports Centre and the various science buildings on the North Haugh. It is named after Katharine Whitehorn – British journalist, writer and columnist, and first female Rector of the University of St Andrews from 1982 to 1985.

The decision to use precast concrete systems for the bulk of the building’s structural frame, cladding and balcony units was taken at an early stage on the project. The brief demanded a robust finish on the building, which would limit the amount of ongoing maintenance required.

Precast concrete is the ideal material of choice for frame construction and cladding.

Rising to the challenge

The job itself was not without its challenges. Speaking with MMC Magazine, Contracts Manager Ramon Escriva said “On the technical side, it was a very difficult installation with most of the panels with no access to fixings. We devised a range of different solutions to provide fixing points. There were also several cases with overhung panels that required special craneage arrangements.”

“Investors not only benefit from revenue gained by the early occupation of units but, also, from the mobility of their capital resource. Quite simply, shorter build times mean developers can complete more projects with the same pot of finance.”

The new additions to the halls of residences will increase residential space offered by the University from 4,000 to 4,900 occupants, in an effort to accommodate the increase of students attending the University.

From a political point of view, this project couldn’t have come at a better time, with Scotland facing a “clear problem” with providing accommodation for university students on campus.
In a recent article in the Scotsman, Green MSP Mark Ruskell called on the Scottish Government to hold a summit of university accommodation providers and student representatives to tackle the issue. Speaking at Holyrood, he said “I think it is clear that we have got a problem across Scotland.

Creagh Concrete has been a pioneer of precast for over 43 years. They are one of the UK’s largest producers of concrete products for a diverse range of market sectors throughout the UK and Ireland. Creagh is leading the market with innovation in concrete, providing new solutions across the construction industry, changing the way people think about concrete, bringing new levels of efficiency and performance to their products.

The company operates from its head oﬃce in Toomebridge, Northern Ireland with bases in Ardboe, Dunloy, Draperstown and Magheraglass and also at Nottingham, England and Edinburgh, Scotland.

We asked them what their ethos is and this is what they said: “Creagh is all about quality products & relationships – strong relationships with our customers, sub-contractors, clients and suppliers. These relationships are key to our business and our approach to working together to deliver successful projects. From initial design consultation, through project development, groundworks, installation and beyond, your scheme couldn’t be in more experienced hands.”

Offsite construction is here to stay

It’s not what you build, it’s how you build it

James Jones in partnership with Ockwells

The E-HAUS – the Future of Construction?