All News
You are here: Home1 / All News2 / Building News3 / Construction output increases at fastest pace in 11 months 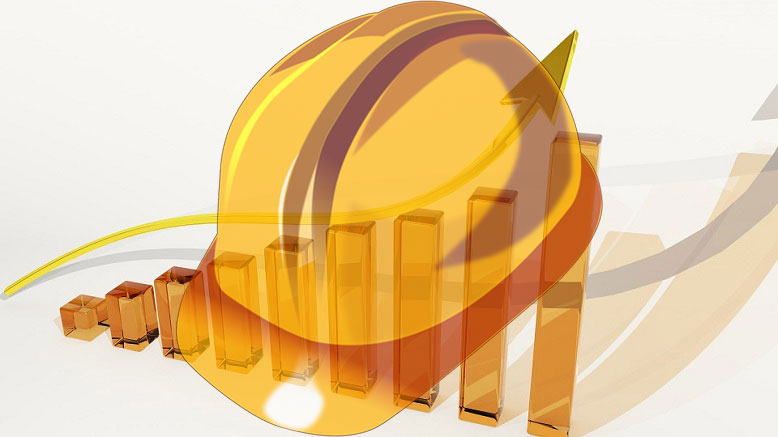 UK construction companies signalled a positive end to the year – led by the fastest rise in new order volumes since January 2016, according to the latest Markit/CIPS UK report. Stronger demand patterns resulted in sustained job creation and a broad-based upturn in business activity during December. However, the construction sector continued to experience intense cost pressures as suppliers passed on higher imported raw material prices. The latest rise in overall input costs was the steepest for just over five-and-a-half years.

At 54.2 in December, up from 52.8 in November, the seasonally adjusted Markit/CIPS UK Construction Purchasing Managers’ Index® (PMI® ) signalled a robust and accelerated expansion of overall construction output. The headline index has now posted above the 50.0 no-change mark for four months running, and the latest reading signalled the fastest pace of expansion since March 2016. Anecdotal evidence suggested that improving order books and a general rebound in business conditions had helped to lift construction output in December. 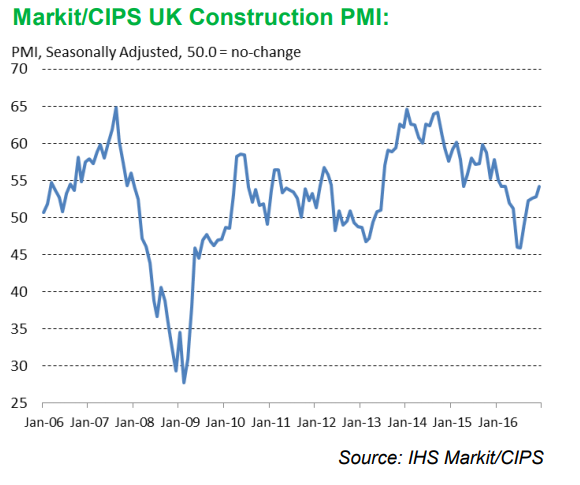 Residential building activity remained the best performing sub-category at the end of 2016. Moreover, the latest expansion of housing activity was the fastest since January. Work on civil engineering projects also picked up at a robust pace in December, while commercial construction increased only marginally.

New business volumes expanded at the strongest rate for 11 months in December, which marked a sustained recovery from the soft patch seen in mid2016. Reports from survey respondents cited rising client demand and a resilient economic backdrop. Greater workloads encouraged a further solid increase in staff recruitment across the construction sector. The latest rise in employment was the fastest since May, but still much weaker than seen on average since the jobs rebound began in mid-2013.

December data indicated that exchange rate depreciation continued to drive up input prices across the UK construction sector. The latest Page 2 of 4 © IHS Markit 2017 increase in average cost burdens was the fastest since April 2011. At the same time, supplier leadtimes continued to lengthen, with the latest survey pointing to the most marked deterioration in vendor performance since June 2015. Some construction firms noted that forward purchasing had resulted in low stocks among suppliers.

Meanwhile, construction companies reported a reasonably upbeat assessment for their growth prospects in 2017. Around half of the survey panel (48%) anticipate a rise in business activity during the next 12 months, while only 13% forecast a reduction. The degree of business confidence edged up to a three-month high during December, with a number of construction firms citing optimism that strong order books would help alleviate Brexit-related turbulence in 2017.

Tim Moore, Senior Economist at IHS Markit and author of the Markit/CIPS Construction PMI® said “December’s survey data confirmed a solid rebound in UK construction output during the final quarter of 2016. All three main areas of construction activity have started to recover from last summer’s soft patch, but in each case growth remains much weaker than the cyclical peaks seen in 2014.

“Housebuilding remains a key engine of growth for the construction sector, with the latest upturn the fastest for almost one year. Meanwhile, commercial activity was the weakest performing category in December, reflecting an ongoing drag from subdued investment spending and heightened economic uncertainty. “The main negative development in December was a sustained acceleration in input cost inflation to its strongest since 2011. UK construction companies noted that the weaker sterling exchange rate had resulted in higher costs for a wide range of imported materials, while some also reported that forward purchasing of inputs had led to depleted stocks among suppliers.”

David Noble, Group Chief Executive Officer at the Chartered Institute of Procurement & Supply, added “The residential sector raced ahead this month, with the fastest pace of growth since January 2016. Strong pipelines of new work were reported across all sub-sectors, and construction firms showed improved confidence after the impacts of uncertainty around the EU referendum.

“Prices continued on their upward inflationary trajectory, at the strongest rate for five and a half years. In response, firms have increased their stock buying to not only fulfil new orders, but also to counteract anticipated price increases throughout the year, as inflationary pressures are set to continue and the weakness of the pound persists. Stock levels at suppliers were also under pressure, as vendor performance deteriorated to the greatest extent since June 2015.

“With these more resilient economic conditions, the sector also reported the fastest pace of job creation since May 2016, as companies developed their workforces to meet new projects. “In the short-term at least, the sector looks set to enjoy these improved demand conditions for the coming months, which is positive news after many months of instability.” 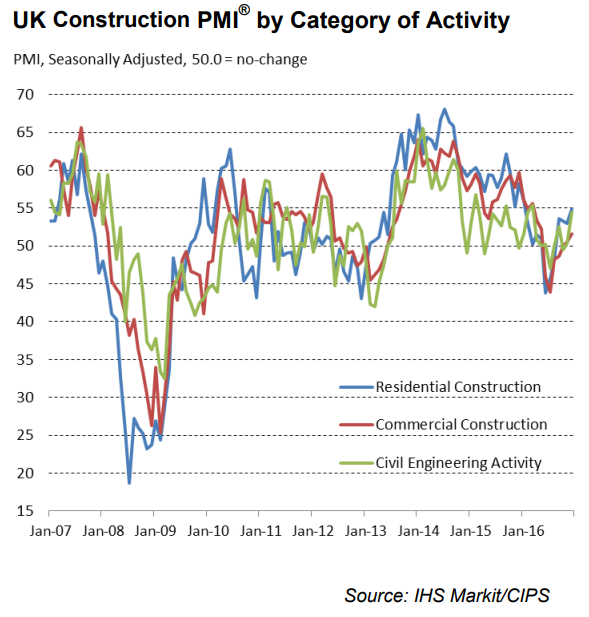