All News
You are here: Home1 / All News2 / Building News3 / Chernobyl: The elephant in the room 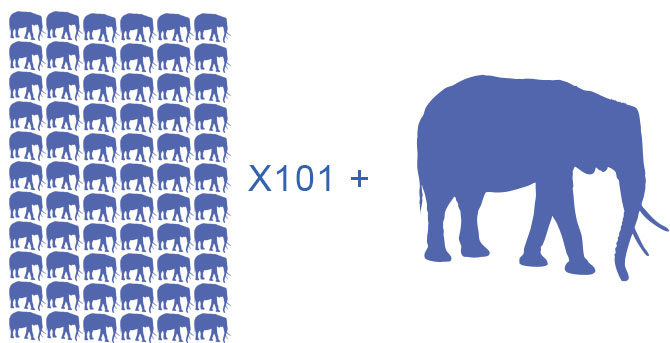 Chernobyl: The elephant in the room

The structure designed to contain the crumbling casing surrounding the dangerous ruins of reactor 4 takes another great leap forward in its uncertain journey to completion. It has now been announced that the second half of the structure was completed on Friday.

Once completed, the mega structure (coined ‘the New Safe Confinement’) will stand at 360ft tall, 541ft long and 853ft wide. Its frame is constructed from a lattice of steel tube sections built on two longitudinal concrete beams – weighing in at an impressive 30,000 tons. To put that into context, it will be almost 4 times the height of Big Ben, over the length of two professional football pitches and nearly as wide as two Westminster Abbey’s. Not to mention a weigh equating to a herd of approximately 6667 fully grown Elephants!

Plans to create a new container to house the poor, leaky structure of the original makeshift sarcophagus were made as early as 1992, but construction work didn’t actually begin until September 2010. Since then it has consistently been plagued by funding issues. The cost of the entire plan is estimated to be €2.15bn, or £1.7bn. A construction such as this has never needed to be built anywhere else in the world, or had such costly obstacles and issues that needed to be addressed throughout every stage of construction.

The structure is comprised of two separate sections and is being built at a safe distance from the reactor, so as not to put the workers at prolonged risk of radiation exposure. The building implements two heavy duty cranes on rails that, once finished, will slide the New Safe Confinement into place over the ruins of the reactor. It will purportedly be tornado-proof and will stand efficiently and safely for 100 years. It will also contain all the equipment required to deconstruct the old structure from within, as well as the damaged reactor.

Weather-permitting, the two main structures will be joined (off-site) by the end of this year. There is still a lot of work to be done until the structure is completed and can be positioned in its final destination. The official date for completion is now the end of 2017; a two year extension on the original date given of 2015. This is because the project is reportedly currently running short of money, €600m behind by the end of the year, to be exact. Also casting a dark shadow over the project are proposed government sanctions that will freeze construction work within the Ukraine; all alarming obstacles that could potentially trip the Chernobyl Shelter Implementation Plan on its rocky road to success.

Just as an elephant never forgets, it is imperative that neither do we – As you read this the old sarcophagus is crumbling, threatening to release 200 tons of radioactive material into the environment. All eyes are on the Ukraine as they painstakingly press forward, working tirelessly on arguably the most important structure of the 21st Century.