All News
You are here: Home1 / All News2 / General News3 / CAN CONCRETE BE GREEN? 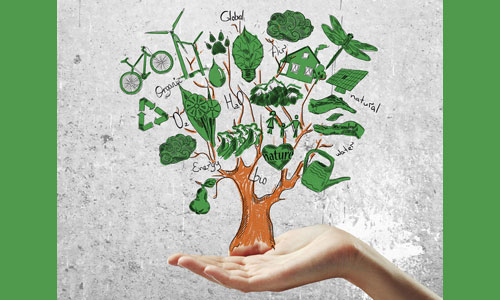 Massachusetts Institute of Technology (MIT) researchers have demonstrated an experimental way of manufacturing cement that releases no carbon dioxide into the atmosphere.

Currently, the production of cement for concrete accounts for about eight per cent of global greenhouse gas emissions, leading to calls for architects to stop using it.

However MIT’s materials scientists are exploring compromise solutions, including one that they consider “an important first step” towards more sustainable cement.

Their process incorporates an electrochemical method that means that, although carbon dioxide is still produced, it is able to be cleanly captured, so that no emissions enter the environment.

A team led by MIT engineer Yet-Ming Chiang team tackled the problem of carbon dioxide emissions at the two points in the cement manufacturing process where they arise: from the burning of coal to create the necessary high heats, and from the gases released during the resulting chemical reaction.

Tackling the first source of CO2 was simply a matter of using electricity from renewable sources — sources that they note are increasingly the lowest-cost option.

The second source of CO2 involved a more novel approach of using an electrolyser to convert the limestone’s calcium carbonate into calcium hydroxide.

Captured CO2 could be used to make fizzy drinks

With this change, the CO2 comes out as a concentrated gas stream that can be easily separated and sequestered. It can be used for products such as liquid fuel or to carbonate beverages.

The CO2 created by current cement production is too contaminated to be used in this way.

The MIT team’s process produces the same Portland cement that is already commonly used around the world. The team wanted to avoid making a new type of cement, knowing it would take a long amount of time for an unknown material to gain acceptance.

Small-scale change could be implemented quickly

MIT’s process, if scaled up, is a smaller change that the team think could be implemented more quickly.

They point out that the number of buildings worldwide is expected to double by 2060, producing the equivalent of one new New York City every 30 days.

“How do you penetrate an industry like that and get a foot in the door?” asked Leah Ellis, a postdoctoral researcher and the lead author on a paper about the project, which argues for change “in a stepwise fashion”.

However, experts and activists at the Architecture of Emergency climate summit in London last month said there wasn’t time to redesign concrete and instead urged architects to swap the material for timber.

“If we invented concrete today, nobody would think it was a good idea,” said Michael Ramage, an architectural engineer and University of Cambridge academic.

“Any process which provides the concrete industry with low-carbon alternatives to conventional OPC (Ordinary Portland Cement) is a welcome addition to meeting our customers aspirations for a greener environment.  The claim of the MIT research team of producing identical OPC using novel methods requiring less energy and producing useful CO2 is especially valuable.

Contrary to the perception that OPC and therefore concrete is not a clean material, its durability, natural resistance to most chemicals, self-healing capabilities in water retaining applications, long service life and complete recyclability have made it ubiquitous in the built environment.  Concrete is analogous to rock, the building material of our planet and  CO2 is a valuable commodity when controlled.   While there are new cement substitutes under development, experience in the manufacture, construction and application of OPC concrete has enormous value and it would be wasteful to dismiss in pursuit of possibly less versatile substitutes meeting discrete metrics only.

Combined with manufacture using clean energy sources, the development of chemical processes producing OPC and useful CO2 is a win-win scenario adding significantly to society’s need for a clean environment and quality infrastructure”.

FLI Carlow are at the forefront of large offsite fabrication technology and have undertaken responsibility for the design, manufacture, delivery and installation of some of the largest infrastructural projects in the UK.

NEWTON PROPERTY LEADING THE WAY ON THE GREEN PATH

England is short of 4m homes
Scroll to top