All News
You are here: Home1 / All News2 / Building News3 / BUILD ON FLOOD PLANES? YES BUT… 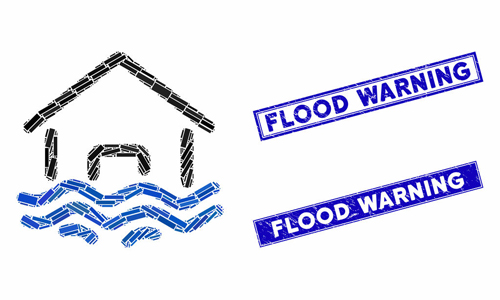 The UK’s house building target is often blighted by where to build, as a result a lot of recent housing projects have been developed on or very near to potential flood sites. As the evidence of climate change is being demonstrated more by the actual weather than the experts, flooding will become a far greater problem in the future than the one the UK is currently facing.

We have many villages and cities that have a long heritage with their footings going back centuries. It may well be that in the distant past of their beginnings when roads were nothing more than lanes, the land they laid their cornerstones on was well clear of the flood planes of the river ways that gave them commercial service. However as many of the Scandinavian countries know, the land is not fixed, over centuries it can be viewed as slow motion fluid and what was once out of reach of potential flood waters is now dangerously near.

So are we foolish to continue to build on potential flood planes. The answer would seem to be no and yes. No, if we continue to use the same old tried and tested specification that expects what is considered normal rainfall for the UK, because realistically that normal is quickly changing making our ‘normal’ quick build housing totally unable to cope with even minor flooding, but ‘Yes’ if we adapt to natures wrath and think more of not where we build but what we build.

Wuhan city in China has been in the news recently for reasons that I am sure no one needs reminding of, but in 1931 it headlined for a very different reason. Considered to be one of the worst floods in history, the effects of flooding in Wuhan in wreaked dreadful devastation and took the lives of more than 300,000.

The problems began in the spring as river water began pouring into the streets and mingled with effluent disgorged from overflowing sewers. Soon the whole city was permeated by a horrific stench, which only grew worse under the heat of the sun. Rickshaw pullers and other menial workers had to wade through filthy water to earn a living, while customers perched precariously on the awnings. This was one of many inequalities to define experiences of the disaster.

In late July, the dykes that encircled Wuhan collapsed. The water that had been held back now cascaded into the city at terrifying speed. Flood waves scoured whole neighbourhoods from the landscape. Thousands of people living in houses constructed from timber and earth drowned or were buried alive. Those who survived salvaged what they could – a little food, religious artefacts, anything buoyant – and began their search for refuge. 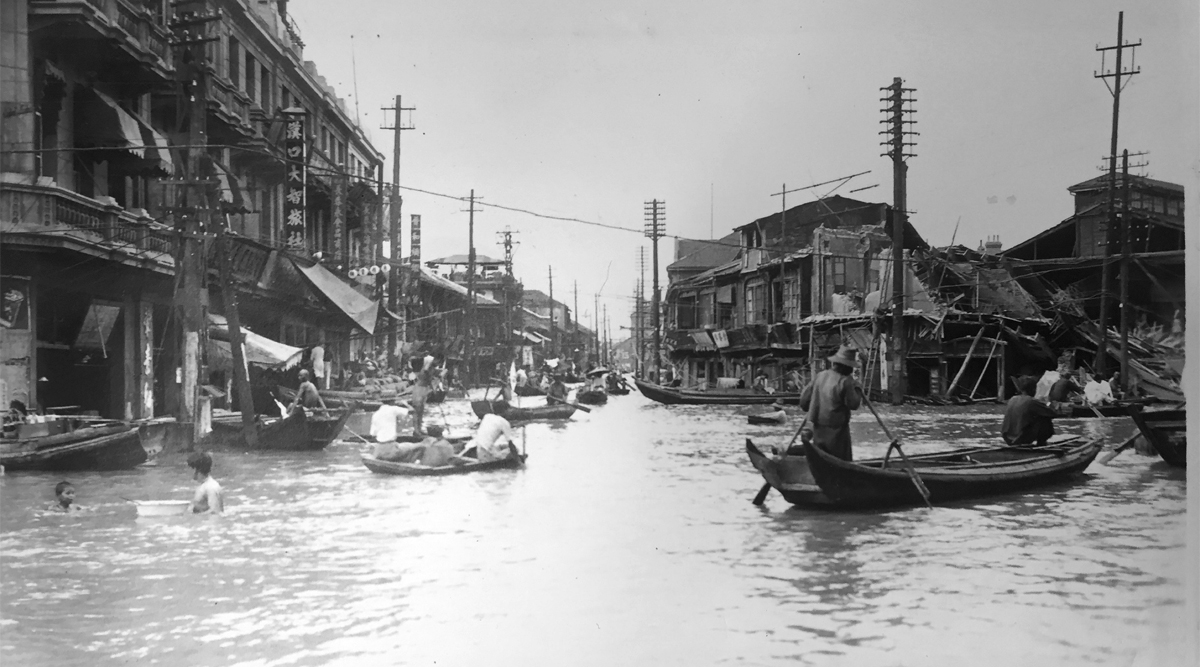 A grim picture indeed, as the century unfolded Wuhan continued to suffer with the rainy season almost guaranteed to produce flooding but in 2015 a project was begun to make 16 Chinese cities, ‘Sponge’ cities and one of them is Wuhan.

“A sponge city is one that can hold, clean, and drain water in a natural way using an ecological approach,” says Kongjian Yu, the dean of Peking University’s College of Architecture and Landscape Architecture, who is helping to coordinate the national project.

Traditionally, Chinese cities handled water well, Yu notes. “But in modern China, we have destroyed those natural systems of ponds, rivers, and wetlands, and replaced them with dams, levees, and tunnels, and now we are suffering from floods.”

Reverse-engineering a city to make it more spongey requires a mental rather than physical shift, he argues. “It’s a whole new philosophy of dealing with water. It is about how we plan and design our cities in an ecological way. Not about piecemeal, manmade engineering projects.

The idea of a sponge city is simple – rather than using concrete to channel away rainwater, you work with nature to absorb, clean and use the water.

During the dry season, the terrace is a park for residents to enjoy. But during the rainy season it can flood, protecting the city without the need for grey infrastructure like flood walls or dykes.

Not only does this safeguard the city by working with nature, but the water is clean, vegetation can grow and a habitat is created for wildlife.

Many other countries through out the world have experienced flooding to a much greater degree than the UK for a far longer duration, in 2016 writing for The Earthbound Report, Jeremy Williams sited 5 construction resolves that could help to hold back the potential destruction and havoc that water, out of control can deliver. 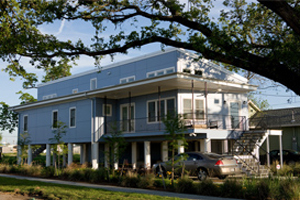 This is the oldest and most obvious way to build a flood proof house. If you must build near a river or the sea, just make sure you lift your building above the likely height of the flood waters. There are a number of ways to do that. You can build a house on stilts, a traditional form in many places. You can build it on a raised platform like a beach house, or on a bank of earth or concrete. Larger office buildings might put a sacrificial car park underneath. A treehouse could also fall into this category. Here’s a an elevated house from Thailand and one from New Orleans. 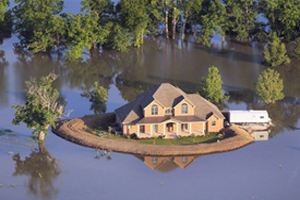 Rather than raise your home above the waters, a second common technique is to protect your home or property from the water by building a sturdy and waterproof wall. This can be done to protect whole towns and villages, but there’s no reason why it can’t be done on individual dwellings. Perimeter walls with watertight gates are one approach. You can also incorporate berms and walls into the landscaping, keeping the water out of a whole property or allowing the garden to flood while protecting the house. That’s what engineer Carl Canty did, below left, so his garden can be under three feet of water and his house is still dry. The example on the right is less subtle, but still effective. 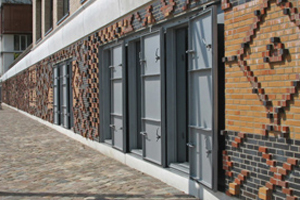 If you’re going to let the flood waters reach the walls of your house itself, you might want to make them watertight. This can be done with sealant, or building in a waterproof membrane. Doors and windows will need to be flood proof. Airbricks and utilities entry points can be raised or sealed. Essentially, dry waterproofing is all about keeping the water out of the building. Germany’s Hafencity, which I wrote about recently, uses this approach for properties on the waterfront. Those are some Hafencity storm doors on the right below, and a house in Grand Rapids demonstrating the principle on the left. 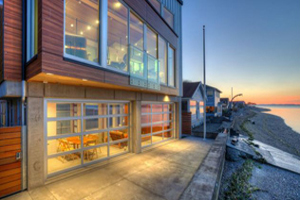 Rather than keeping the water out of a building, an alternative approach is to let it in but minimise the damage it can do: fit a solid floor rather than wood, move power outlets up the wall and ensure that any unmovable furniture is made of a material that can safely take a soaking. Wet floodproofing is often used to retrofit flood-prone properties that the owners can’t sell, which is making the best of a bad situation. Houses built for it are much better, such as the house on the left below which is built to withstand a tsunami, or this waterfront hospital in Boston. Planned with climate change in mind, its lower floor has a swimming pool and non-essential services so that the whole thing can flood without interrupting patient care. 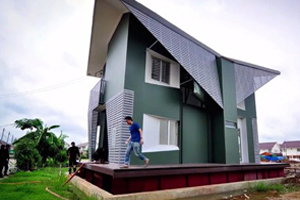 Second-guessing how far future floodwaters might rise is a dangerous game in an age of climate change. If your house can float, it’s guaranteed to always be above the water. One way to do it is to build on pontoons and have a building that’s always floating. Below is an ice-bound floating development in the Netherlands, which has many examples of waterborne architecture. Amphibious houses are slightly different. They’re on land and only float when there’s a flood.