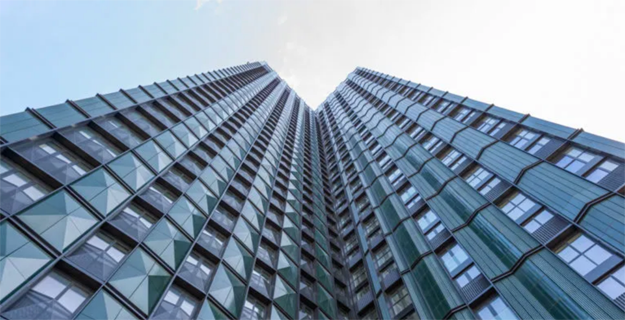 The owners of the world’s tallest block of prefabs have denied that prospective residents of 101 George Street’s towers have been stalled for more than six months because of issues with the buildings’ cladding.

101 George Street stands empty, more than six months after the first tenants had expected to move in

Inside Croydon revealed earlier this week that the 546 sky-high apartments in a £180million development for American property developers Greystar have remained empty, despite having taken deposits last year from hundreds of eager tenants.

The development is now being marketed as “Ten Degrees”. Despite having given some of the tenants  moving in dates beginning from August 2020, no one has yet been allowed to take up residence in the two imposing black-clad blocks close to East Croydon Station.

In correspondence to customers, the agents managing the building have blamed Croydon Council’s failure to sign off on the towers’ building regulations.

At nearly 450-feet high, the taller, 44-storey tower at 101 George Street claims to be the world’s tallest modular building. On a clear day, from some of the upper floors, Europe’s tallest building, The Shard, is just about visible 10 miles away.

Or it would be, if anyone had been allowed to move in.

The builders, Tide Construction, remain silent on the issues which have delayed occupancy.

As one prospective tenant told Inside Croydon today, “I was one of the those who paid a £200 deposit in September. I was told that the building was ready to welcome tenants in November.

“Then, in October, we were given very confusing information about an approximate move in date. We waited for months… we asked for a refund a couple of weeks ago.”

The Croydon development has recently been removed from Greystar’s marketing website. “Ten Degrees has disappeared. Like it never existed,” said the disappointed customer. “I found this very strange.”

The delays prompted some speculation that the council’s building inspectors had refused to sign-off the building as compliant with all regulations because of an issue with the towers’ cladding.

Greystar have denied this.

Responding to Inside Croydon’s report earlier this week, a spokesperson for 101 George Street said: “There is no issue with the cladding.”

The developers declined to comment further on the continuing delays and inconveniences for their customers.

A WINDOW OF OPPORTUNITY
Scroll to top