All News
You are here: Home1 / All News2 / Article3 / You find the funniest things on construction sites! 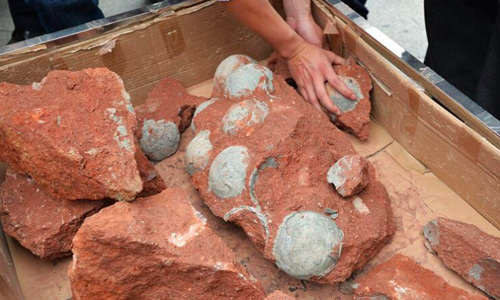 43 fossilised dinosaur eggs were recently discovered by construction workers during roadworks in Heyuan city in China. What else lies undiscovered just beneath your steel toecap boots? Joe Bradbury of buildingspecifier explores:

Heyuan is affectionately called “the hometown of the dinosaur” by locals. So far over 13,000 fossilised eggs have been discovered in the area over the last 20 years. The first eggs to be discovered were found on a construction site in 1995 when two young boys were playing and discovered what they first thought were peculiar rocks. Another discovery was made the following year on a river bank in 1996. Since then there has been discovery after discovery.

The high volume of Dinosaur fossils, skeletons and footprints makes Heyuan a Mecca for palaeontologists and has resulted in the city being entered into the Guinness Book of World Records for having the largest collection of dinosaur eggs in the world.

City officials have since spent millions on constructing a dinosaur theme park and museum in a bid to cash in on their archaeological findings, however it appears efforts have been in vain as it has thus far failed to draw in any significant number of tourists.

The one review on Trip Advisor for the museum says “It is a small museum. It took us not more than 30 minutes to finish viewing.”

In conversations with the Chinese news, local archaeologist Du Yanli stated that 19 of the 43 eggs that were found are still intact, and some of them quite sizeable. The largest had a diameter of 13cm.

Most of the fossils, eggs and bones found in the city so far date from the late Cretaceous period, 89-65 million years ago.

The eggs have been given to the Chinese Academy of Sciences who will now attempt to reveal the species of dinosaur that laid the fossilised eggs.

This isn’t the first weird or wonderful thing that has been uncovered on a construction site. With large excavations commonplace in the building industry, we are often the first to find things. Here are our top 3 British discoveries:

The large scale construction of Crossrail through the very heart of London is consequently resulting in one of the biggest archaeological programmes ever undertaken in Britain. Crossrail operates over 40 construction sites; one of which Crossrail is in Liverpool Street. Archaeologists recently unearthed up to 3,000 skeletons from the Post-Medieval Bedlam burial ground and parts of the Roman suburbs found as a direct result of the works.