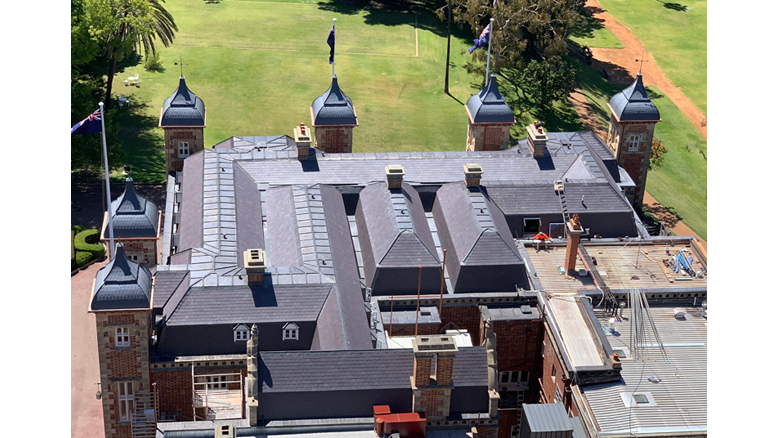 Cambrian-age Welsh slate, which is produced at Welsh Slate Ltd’s Penrhyn quarry in North Wales, has become the first slate in the world to be designated a Global Heritage Stone Resource (GHSR).

Its designation by the International Union of Geological Sciences (IUGS), which represents the national geological societies of 121 countries, recognises its importance to the architectural heritage of the many countries in which it has been used in the past and continues to be used today.

It easily met the prestigious GHSR criteria of having a cultural history encompassing a significant period, been utilised in significant works, and widely used in numerous countries.

Cambrian Welsh Slate has been quarried in Wales for almost 2,000 years (its first use being recorded in Roman times), has been utilised on major heritage projects, and been used throughout the world, particularly Australia, New Zealand, America, the West Indies, Europe and even Hawaii.

It was proposed for GHSR two years ago by the Welsh Stone Forum supported by the Stone Roofing Association (SRA), Gwynedd County Council, the Snowdonia National Park Authority and Welsh Slate (Ltd) at the same time as the Welsh slate industry is being proposed as a World Heritage Site.

The Cambrian slate belt in Gwynedd extends over 14 kilometres and was historically quarried in three main areas although it is currently only extracted at Welsh Slate’s Penrhyn quarry in Bethesda where it is produced for roofing, architectural (cladding, flooring, paving and walling) and a variety of crushed slate products.

Natural slate expert Terry Hughes, former technical manager with Welsh Slate and chairman of the SRA, said: “We were a supporter of the GHSR concept from its inception. It has been a long haul writing the proposal at the same time as the designation scheme was being developed. We are now delighted that the importance of quarrying and the continued production of Welsh Slate especially, has been recognised. All too often the public forget that almost everything they use which isn’t a plant probably came out of the ground.”

The IUGS explained: “Natural stone rarely excites major interest despite the fact it has been used for construction and other purposes for thousands of years and is part of human tradition. Yet natural stone is also the world’s most sustainable mineral resource because it requires less energy to utilise, produces no toxic by-products, and provides the earth’s most durable construction material. So natural stone should create more than passing curiosity.”

Cambrian Welsh Slate has been used on Buckingham Palace, the Royal Pavilion in Brighton and the British Library in the UK; The Royal House, Copenhagen, Hotel de Ville, Paris and Dublin Castle in Europe; the Shaker Museum and Boston airport in America, Christchurch Arts Centre in New Zealand, and Government House [Perth, pictured] and Sydney Supreme Court in Australia.

Welsh Slate’s commercial director Michael Hallé said: “This is international recognition of the importance of the slate produced from the Cambrian stone in Penrhyn and is important for heritage buildings all around the world.”

GHSR designation seeks international recognition of natural stone resources that have achieved widespread utilisation in human culture. It aims to promote greater prominence for natural stone as used in artistic and architectural masterpieces and heritage building as well as routine historic stone applications.

Welsh Slate is trusted to help deliver a medieval facelift

Welsh Slate turns itself inside out
0 replies

Never run out of hot water with Rinnai’s 11i multipoint continuous flow water...