All News
You are here: Home1 / All News2 / General News3 / Trump says no more to Brutalist Architecture, Perhaps Imperialist Rome... 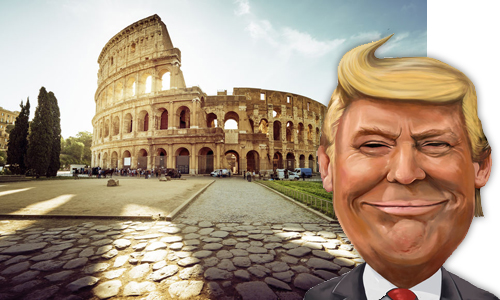 Projects by HOK, Arquitectonica and Morphosis have been singled out for criticism in president Trump’s draft executive order for federal buildings, which would outlaw brutalist and deconstructivist styles if it becomes law.

The draft of the Making Federal Buildings Beautiful Again executive order highlights three federal buildings completed in the last 20 years as examples of those with “little aesthetic appeal”.

They are the San Francisco Federal Building completed in 2007 by architecture firm Morphosis, Downtown Miami’s Wilkie D Ferguson Courthouse by Arquitectonica and HOK completed in 2007, and the Austin US Courthouse completed by Mack Scogin Merrill Elam Architects in 2012.

The document states that “serious consideration” should be given to redesigning buildings that don’t meet with requirements, where it would be “feasible and not uneconomical”. It alleges that “the federal government has largely stopped building beautiful buildings that the American people want to look at or work in”.

Some of the modernist architecture to come under fire in the report:

None of the firms mentioned in the order has so far responded to Dezeen’s requests for comment.

Revealed last week, Trump’s plans for the executive order calls for all federal buildings to be completed in the “classical architectural style”, whether newly built or renovations of existing structures.

The draft states that more recent structures are considered “uninspiring… and even just plain ugly” by the public and forbids those that take cues from the style of two key modern architectural movements, brutalism and deconstructivism.

“Architectural designs in the Brutalist and Deconstructivist styles, and the styles derived from them, fail to satisfy these requirements and shall not be used,” the document states.

Brutalism, one of the 20th century’s most controversial architectural styles, is recognisable by its modular and monolithic forms and concrete structures.

The style was used by well-known 20th-century architects, like Marcel Breuer and Le Corbusier, and has become celebrated recently. A number of brutalist projects have been granted protected status, while others, like Boston City Hall, have been preserved and renovated.

Deconstructivism grew in the late 1980s out of postmodernism. The work of architects like Peter Eisenman, Frank Gehry, Zaha Hadid, Rem Koolhaas and Daniel Libeskind is often described as influenced by the style.

The draft order states that the style is known for “fragmentation, disorder, discontinuity, distortion, skewed geometry, and the appearance of instability”.

Trump’s Making Federal Buildings Beautiful Again order instead calls for classical architecture to be “the preferred and default style”. As defined in the draft, this is architecture derived from the forms and principles of classical Greek and Roman architecture.

Approved examples are mostly located in Washington DC and date back to the mid-1800s, such as the neoclassical Treasury Department and Eisenhower Executive Office Building with its French Second Empire architectural style.

Tuscaloosa Federal Courthouse in Alabama, built in 2010 by Hammond Beeby Rupert Ainge Architects, and the Lincoln Memorial from 1922 are also highlighted in the order as beautiful buildings.

1962 Guiding Principles would be nullified

“The Founding Fathers attached great importance to Federal architecture,” the draft states.  “President George Washington and Secretary of State Thomas Jefferson consciously modelled the most important buildings in Washington DC on the classical architecture of democratic Athens and republican Rome.”

“They wanted America’s public buildings to physically symbolise our then-new nation’s self-governing ideals,” it continues. “Washington and Jefferson, both amateur architects, personally oversaw the competitions to design the Capitol Building and the White House.”

“The Guiding Principles implicitly discouraged classical and other designs known for their beauty, and declared that design must flow from the architectural profession’s reigning orthodoxy to the Federal government,” the draft order states.

The news of the order has triggered an outcry within the architecture profession, with the American Institute of Architects (AIA) creating an online petition to oppose the plan.

British journalist Phineas Harper, who is the deputy director of the Architecture Foundation, warned that it was the latest example of traditional architecture being used to disguise racist agendas in an opinion column for Dezeen.

The revised Guiding Principles is still in draft form and has not yet been signed by Trump to bring it into effect.

The title of the executive order is a riff off Trump’s campaign slogan Make America Great Again (MAGA) popularised during the 2016 presidential election.

If issued, a committee called the Committee for the Re-Beautification of Federal Architecture would be created to implement the new guidelines.