All News
You are here: Home1 / All News2 / General News3 / THIS WEEKS CIPS AND ONS REPORTS 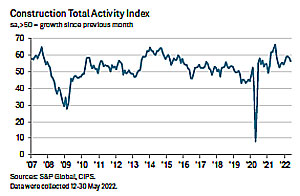 May PMI® data signalled another growth slowdown in the construction sector amid a considerable loss of momentum for the residential category. The latest rise in housing activity was the weakest since the recovery began two years ago. Survey respondents suggested the subdued consumer confidence and worries about the economic outlook had constrained demand.

Higher borrowing costs and intense inflationary pressures were also cited as factors likely to hold back growth over the next 12 months. The latest survey data indicated that business activity expectations at construction companies were the least upbeat since August 2020.

The headline S&P Global / CIPS UK Construction Purchasing Managers’ Index® (PMI®) – which measures month-on-month changes in total industry activity – registered 56.4 in May, down from 58.2 in April and the lowest reading for four months.

Weaker trends in the house building sub-sector were the main brake on growth, with this index falling to 50.7 from 53.8 in April. Moreover, the latest reading signalled the worst performance for residential work since May 2020.

Commercial building was the fastest-growing segment in May (index at 59.8), with the speed of expansion easing only slightly since April. Construction companies noted strong demand for commercial work, despite a degree of hesitancy due to the uncertain economic outlook.

Meanwhile, civil engineering activity increased for the fifth month running and at a robust pace (index at 55.5) amid a sustained boost from major infrastructure projects.

Total new orders expanded again in May, which marked two years of continuous sales growth in the construction sector. That said, the latest increase in new work was the slowest since December 2021.

Job creation accelerated slightly in May and was the strongest for four months. Survey respondents typically cited efforts to boost capacity and meet rising customer demand. There were again widespread reports citing recruitment difficulties due to shortages of suitably skilled candidates.

May data highlighted strong demand for construction products and materials, as signalled by a steep and accelerated rise in total purchasing volumes. Efforts to replenish stocks and pre-purchase ahead of price rises also contributed to higher purchasing activity in May, according to survey respondents.

There were positive signals for supplier performance in May, as delays were the least widespread since February 2020. Some firms noted an improvement in the availability of construction items, despite ongoing challenges including logistics bottlenecks, Brexit trade frictions and supplier staff shortages.

Rapid cost inflation persisted in May, with the vast majority of survey respondents (73%) reporting a rise in purchasing prices. This was linked to rising fuel, energy and raw material costs. That said, the overall rate of inflation eased to a three-month low.

The number of construction firms predicting an increase in business activity during the year ahead (46%) continued to exceed those expecting a decline (19%) by some margin. However, the resulting index measuring overall growth expectations across the construction sector signalled the weakest degree of optimism since August 2020.

Construction companies suggested that lower consumer confidence, rising borrowing costs and heightened economic uncertainty were all likely to act as headwinds to client demand in the next 12 months.

While latest ONS figures show that job vacancies grew in the first quarter of this year, recent data indicates that vacancies in building and construction are beginning to slow, with figures dropping 56% between March and April 2022. With application numbers also continuing to decline, these statistics suggest that the lack of resources across the UK is impacting job growth across the sector. That’s according to the latest data from the world’s largest network of job boards, Broadbean Technology.

According to the statistics, the building and construction sector saw an even more concerning fall in the number of people applying for roles, with decreases of 75% between March and April, and 76% when comparing April 2022 with the same month last year. While this is cause for concern, it’s perhaps unsurprising given the widely documented skills shortages reported in the sector.

“The UK’s skills crisis is continuing to be a focal issue for the building and construction sector, and for good reason given that applications are dropping at a concerning rate. With a combination of Brexit and Covid accelerating our need for talent in the sector, vacancies have been on a constant upwards trajectory up until now, but there are simply not enough candidates to match this demand. Given the dearth of available resources, there’s a high chance that this drop in new vacancies is simply a sign that businesses cannot fill jobs they’ve had open for some time and are unlikely to add any more roles if they cannot meet the current operational needs.”

“For employers, now is a critical time. Businesses need to rebuild and nurture dwindling talent pools, utilise innovative technology and maximise partnerships with external talent suppliers in order to find the resources that are needed. Difficult times are ahead for the UK economy, and we need a recruitment market that can best support economic growth.”

RESTORING THE ‘RIGHT TO BUY’

Surveying Gathers Pace at the Palace of Westminster
Scroll to top