All News
You are here: Home1 / All News2 / General News3 / THE BLUES FOR BIG BEN

The black paint used to cover up pollution in the 1930s has been removed from the famous clock front.

The £80 million makeover of Big Ben is beginning to be unveiled as scaffolding continues to be removed from the national landmark.

Pictures show the painstaking level of detail that has gone into the five-year refurbishment, which is due to wrap up next year, of the famous bell and Parliament’s Elizabeth Tower, in which it is housed.

Those passing over Westminster Bridge will be able to spot a colour-scheme change, along with the restoration of the decorative symbols of the UK which adorn the clock tower. 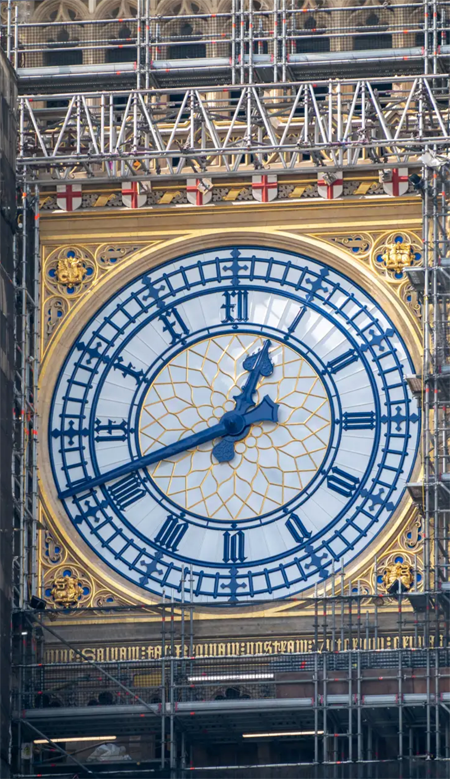 For decades, the clock dials and the stonework surrounding them were painted in many layers of black paint that became synonymous with Big Ben.

Experts believe the colour scheme was chosen in the 1930s to mask the effects of pollution but, returning to the original vision by Parliament’s architects Charles Barry and Augustus Welby Pugin, the clock has since been updated.

The black paint on the stonework around the clock dials has been removed and certain features have been gilded again.

Other key details have also returned to Barry’s original design, such as the row of six shields above each dial that displays St George’s red cross on a white background.

Heraldic shields – situated above the Ayrton Light, a lantern which shines when either House of Parliament is sitting – representing four parts of the United Kingdom have also been restored.

The Irish shamrock and Welsh leek have been returned to their original green while the Scottish thistle is green with a bright purple seed head. The English rose has been painted red and white as Barry suggested.

Adam Watrobski, principal architect and head of architecture and heritage at the Houses of Parliament, said: “Using historic paint analysis and references including Barry’s original design watercolour, contemporary illustrations and archival photographs, we have recreated the original colour scheme.

“The dials and clock hands are Prussian blue and gold and the adjacent areas make use of the red, white and blue colours of the Union flag.”

The refurbishment was originally expected to be finished this year but was delayed as the Covid-19 crisis held up work.

Big Ben is due to ring again from early next year once the work is complete.

It has been largely silent since 2017 due to repairs on the clock and the tower, only being reconnected for significant occasions.

New Sustainability Champion to Lead Change in the Finishes and Interiors Se...
Scroll to top