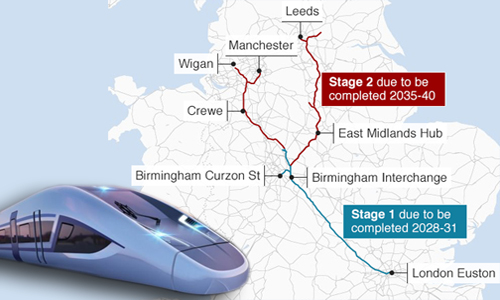 As Boris Johnson announces that HS2 is to forge ahead with a new streamlined plan, the debate will continue to rage. The overall costs, suggested by some, to be nearer to 160Bn rather than the latest projection of 106Bn being the biggest contention, with other considerations, such as the loss of woodland also being sited.

The major justification for HS2 is to increase economic growth with its deployment providing an extra 15Bn a year by 2037. Many a fine phrase is quoted about productivity and skills deployment in the usual misty way of government, leaving the majority of us completely in the dark as to how this economic growth will actually happen. What is apparent is that in the main the argument for HS2 is about getting people rather than produce more quickly from the North to the South and joining up the largest of the Northern cities, in order to feed those area’s growing need for the skilled labour and so increase economic growth. This suggests the type of skills required are not the highly paid industry professionals but rather those of us that earn a living wage for skills that lie in their physical abilities to make real the dreams of the professional. The concept that those most needed individuals would be able to afford to commute to the cities that require them, saving the extra travel minutes that will be available by using HS2, seems to say the least unrealistic.

What we hear little of with regard to HS2 is its impact on the transportation of freight. With the prospect of our trade deals more likely to move across the Atlantic rather than the channel it would seem that distribution from our ports and airports will be critical. Given the right planning an improved rail infrastructure could be very positive in addressing the transportation of goods and help to alleviate the severe commercial congestion on our roads. Planning is the important factor where this is concerned and many fear that it has not been properly thought through in relation to HS2.

The question ‘Will HS2 stimulate economic growth?’ was asked as part of a report by the Economic Affairs Committee which was ordered by the House of Lords in 2015, the following is the conclusion to that section of the report which can be read in full from this link.

We heard evidence that London was likely to be the biggest beneficiary from HS2. This has been the case with similar projects in other countries where the largest cities have benefitted the most, including in France where Paris was the biggest beneficiary from the TGV. This does not mean other cities may not receive some economic benefit from HS2, which could stimulate growth and play a role in rebalancing the economy if coupled with appropriate policies to foster economic growth.

HS2 must not lead to a reduction in investment in improving other areas of the UK rail network. Investment on lines such as the East Coast Main Line north of Leeds, or rail services elsewhere in the country, could play an important role in stimulating growth outside of the South-East. Any reduction as a result of HS2 could mean these areas lose out.

Stations located outside city centres as proposed for Sheffield Meadowhall and the East Midlands Hub HS2 stations are less likely to bring economic benefit to the cities in which they are situated. Where stations cannot be located in city centres they must be properly connected into regional transport networks to ensure the maximum benefit is derived from them.

It is important that stations are linked into local transport networks in order to reduce the risk that HS2 brings little or no economic benefit to nearby areas. We agree with the Growth Task Force that the Government should provide leadership nationally to ensure that the right steps are taken to prepare cities with stations for HS2.

As noted in Chapter 2, concerns have been raised that the full cost of complementary projects required to maximise the benefits of HS2 have not been captured. The cost of any additional work undertaken in cities to ensure the maximum benefit is derived from HS2 and who is to pay for it needs to be made clear to ensure the right decisions are made.

Rail freight is important to the UK economy, but it has largely been ignored during the development of plans for HS2. The Government should set out in more detail how HS2 will benefit rail freight and how it will address the concerns raised by the freight industry.

This is largely reported from a personal and perhaps uneducated viewpoint, but surely the taxpayer, who will ultimately pick up the bill for HS2, has a right to ask simple questions of the government and receive straightforward answers.

It is well documented that Mr. Johnson has a great fondness for grandiose infrastructure schemes such as the airport on the Thames and a bridge to Ireland, perhaps HS2 will prove the construction legacy of his leadership. As so many other individuals in power have suggested, history will tell the story, each hoping that the story would favour rather than damn them to posterity.