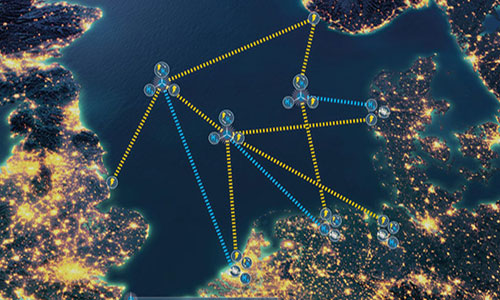 The North Sea Wind Power Hub program — a consortium consisting of European energy companies  TenneT, Energinet, and Gasunie together with the Port of Rotterdam — is seen as a way for the Netherlands, Belgium, the UK, Norway, Germany, and Denmark to meet their goals for decarbonizing their economies as agreed to in the Paris climate accords in 2015. After extensive studies and in consultation with all appropriate government stakeholders, NSWPH has announced that its plan for up to 10 offshore wind energy hubs is technically feasible

The consortium says its goal is to “generate energy from renewable sources while simultaneously realizing the same at the lowest possible environmental impact and cost.”

“In the future (after 2030), once large, far-offshore wind regions have been defined for development, it will be possible to develop several hubs that will act as central platforms for supporting the infrastructure required to transport the energy, e.g. for converting electricity into gas (including and in particular green hydrogen) instead of using the offshore converter platforms commonly used at the moment.

“The relevant wind power capacities in question range from 70 to 150 gigawatts by the year 2040 and up to 180 gigawatts by 2045 in the North Sea and are intended to be developed using a modular, gradual approach. Depending on the scope of the development, the NSWPH could lay the foundation for supplying hundreds of millions of Europeans with green energy.”

According to an article by Marine Executive, the three types of foundations that could be used for the hubs are:

Getting Power To The Shore

The first hub and spoke project will likely be connected to the shore using undersea cables, but for larger hubs located further offshore in deeper water may use the electricity generated to create hydrogen gas which would then be shipped ashore.

For any given hub size, the total investment costs for the transmission assets were found to be similar for all-electric, all-hydrogen, and combined electricity and hydrogen configurations. Also, the spatial requirements are similar for the different configurations.

The fact that the plan is feasible does not guarantee it will become a reality, of course. But it does mean energy companies in Europe are thinking in terms of lowering carbon emissions in the electrical sector, a vital part of meeting the objectives of the Paris climate accords.

The importance of Heat Air Moisture Management in DfMA

Showcasing construction to youngsters, to give them grown up choices
Scroll to top