All News
You are here: Home1 / All News2 / Product News3 / P C Henderson announced as best exporting company in the UK 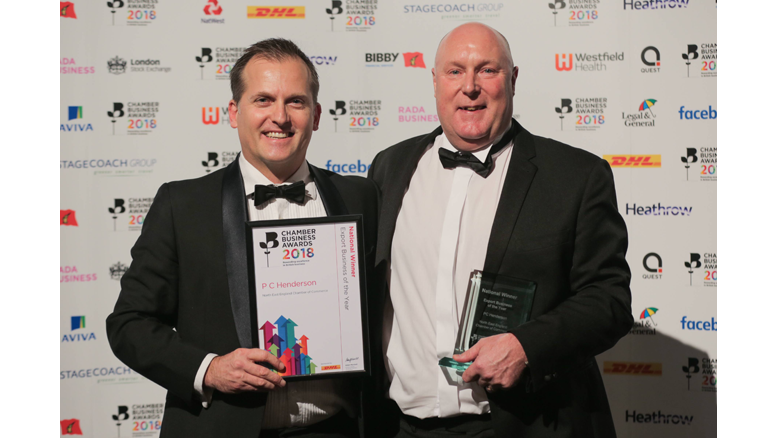 Sliding and folding door hardware manufacturer – P C Henderson – beat off national competition on Thursday night to be named Export Business of the Year at the British Chamber Awards.

After winning the regional finals of the North East Business Awards back in April – the company was selected by the North East England Chamber of Commerce to represent the region at the national finals. The firm didn’t disappoint – beating off 8 other companies in its category, after a rigorous judging process, to be named the best exporting company in the UK.

Trevor Cossins, Managing Director at P C Henderson commented, “Exporting on the scale that we do isn’t easy – it takes a huge amount of dedication. We’ve listened to our customers first hand and transferred this knowledge into developing products that suit specific market requirements. To be named the best exporting company in the UK is recognition of the highest kind and we couldn’t be happier”.

Held at Tobacco Dock, London – the 15th Annual British Chamber Awards welcomed over 70 companies from all corners of the UK to battle it out across 14 award categories. Hosted by TV presenter Jenni Falconer and headline sponsored by Facebook, the awards are viewed as one of the most contested and prestigious awards programmed in the UK.

The hotly contested Export Award aims to shine a spotlight on companies that have generated substantial success in international trade. Chief Executive of North East England Chamber of Commerce, James Ramsbotham, commented; “We are delighted one of our members has received such a tremendous accolade and in particular for this international trade category.

“The Chamber was established by businesses to support each other’s desire to expand their marketplaces overseas and P C Henderson are a great example of this same ambition today. Congratulations to everyone there who has worked so hard to achieve success”.

This latest success is now the 4th award the company has won for its exporting achievements in under 2 years. Judges cited product adaptation, meeting market specific preferences and putting the diverse needs and preferences of its customers as the reasons behind its success.

“To win not one, but four awards for our exporting achievements in such a short space of time is a huge achievement. Every single award is credit to our hard working and experienced team that are dedicated to the global success of P C Henderson”, continued Trevor.

P C Henderson’s export sales currently account for over 70% of overall sales and the company exports to over 70 countries worldwide. The company will build on this success in 2019 when it will be exhibiting at BAU – a major tradeshow in Munich, Germany.