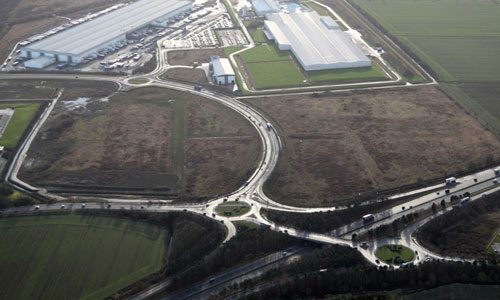 Trains for the London Underground are to be built at a new facility in Goole.

Siemens has received a planning permission grant for this to go ahead. This is combined with Croda Europe’s planned move to Goole 36 Underground, as well as Beal Homes’ new housing development in the area.

All of these projects are set to unlock the potential of the 30-acre Capitol Park Goole, according to Capitol Park’s developers Sterling Capitol.

Siemens has just been given approval by the East Riding of Yorkshire Council for its proposed £200m rail manufacturing facility on a 67-acre site at Goole 36. The plans include 860,000 sq ft of manufacturing, commissioning, warehouse buildings and stabling sidings, as well as a four-storey 54,000 sq ft office building.

As part of the project, Siemens is planning to create up to 700 jobs and a further 250 during the construction period, with an additional 1,700 potential UK supply chain roles.

Richard Beal, chief executive of Beal Homes, said: “Our plans amount to a huge economic boost for Goole – we’ll be investing more than £100m over the next 15 years.

“Our development will provide the high-quality housing, from starter homes to executive properties that Goole needs to support current and planned investment, encourage further growth and realise the town’s rich potential.

“Pending planning approval, we expect to be on site later this year and delivering the first new homes in the second half of 2020. That means much-needed, high–quality homes for local families and people attracted to the area. It also means many new jobs working directly with us or with local sub-contractors and suppliers.

“We’re proud and excited to be among many investors who are leading the way in delivering the regeneration of Goole and creating an exciting future for the town and its people.”

The factory will manufacture 94 trains for the Piccadilly line. The new trains are part of London Underground’s ‘Deep Tube’ upgrade programme to modernise the Piccadilly, Bakerloo, Central and Waterloo and City lines.

Meanwhile, East Yorkshire-based Beal Homes has submitted detailed plans for the first phase of a large-scale development of 800 homes on a 73-acre site close to Junction 36 of the M62 in Goole.

The overall scheme will be the largest residential development in the Goole area for many years. Covering an area equivalent to almost 50 football pitches, the development will include the provision of a new primary school and additional open space.

Mike Heydecke, of Starling Capitol, said: “Capitol Park Goole, adjacent to the M62 at Junction 36, is perfectly positioned to take advantage of these investments. The park has been opened up by the new link road from the motorway to the port and has massive economic potential for employment. This potential can now be further unlocked.”

THE ASIAN BATTLE FOR LAND – Food or Energy?
Scroll to top