All News
You are here: Home1 / All News2 / General News3 / GRENFELL – ‘SLAP IN THE FACE FOR JUSTICE’ 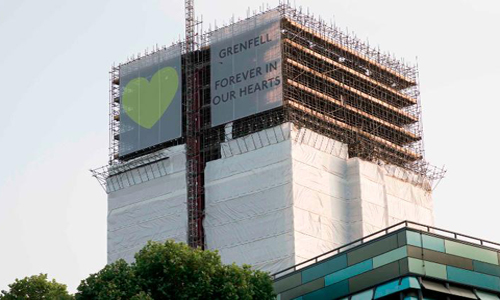 Benita Mehra resigned from the Grenfell inquiry after it was revealed that she had links to Arconic, the US company that made the aluminium composite material (ACM) panels that were on the tower.

Last week it was reported that Ms Mehra ‘has links to the company which made the cladding blamed for accelerating’ the fire. Earlier this month, the chartered engineer replaced Professor Nabeel Hamdi on the inquiry panel, with campaign group for the bereaved and survivors Grenfell United believing this was ‘snuck out just before Christmas’.

Grenfell United were ‘angered’ and disappointed that Professor Hamdi, an academic ‘with expertise in housing, design and planning’, was replaced by an engineer, and claimed it had not been ‘given an explanation for the change’. The group undertook research of Ms Mehra and revealed she had run the Women’s Engineering Society, which received a £71,000 grant from the charitable arm of Arconic – the Arconic Foundation – three months post Grenfell.

Arconic’s polyethylene filled panels had already been found by the inquiry to be ‘the principal reason why the flames spread so rapidly up the building’, and the grant was the ‘largest’ received in 2017 by the society. Grenfell United said this was a ‘clear conflict of interest’, with Ms Mehra’s appointment a ‘slap in the face’ for hopes of justice. It called for her to stand down before the second phase as it would examine ‘how the Arconic cladding panels were chosen, their safety testing, marketing and promotion’.

An inquiry spokesperson had been ‘confident that Benita Mehra’s former presidency’ of the society did ‘not affect her impartiality as a panel member’, while a Cabinet Office spokesperson said there were ‘robust processes’ to ensure that ‘any potential conflicts of interest are properly considered and managed’, adding that ‘the Arconic Foundation donated to a specific scheme which provides mentoring for women in engineering and is unrelated to the issues being considered by the inquiry’.

Mr Johnson had said that officials had ‘not identified any concerns’ with Ms Mehra’s appointment, and she had ‘confirmed that she is not aware of any conflict of interest’. An Arconic spokesperson said the foundation was ‘independently endowed and managed’ to ‘advance science, technology, engineering and mathematics education and training worldwide’, and create access to those fields for women internationally, with the 2017 grant ‘purely on this basis’.

Mr Johnson later told survivors he would investigate Ms Mehra’s role, at a pre arranged meeting with community representatives at Downing Street. Mohamed Ragab, whose nephew Hesham Rahman died in the fire, noted Mr Johnson ‘said he had no idea about this woman dealing with this company’, and ‘would have to investigate and find out what is going on’.

An anonymous attendee commented that Mr Johnson ‘didn’t seem to know who she is’, and promised that ‘this would be definitely be investigated’, as well as that ‘anything that causes us discomfort should not be allowed to happen’. The Guardian reported over last weekend that Ms Mehra had stepped down over the connections to Arconic ‘less than 48 hours before’ the inquiry resumed, Mr Johnson announcing that he had accepted her resignation.

He added that ‘as the inquiry’s phase two hearings begin, we remain completely committed to getting to the truth of what happened, learning lessons and delivering justice for the victims’, while Ms Mehra’s resignation letter to him stated she had made ‘a regrettable oversight’ and was resigning ‘with deepest regret’. She added it was apparent that the link to Arconic ‘has caused serious concerns to a number of the bereaved, survivors and resident core particpants’.

However, she stressed she had ‘never spoken to anyone’ at Arconic and that her only role had been to review the initial proposal. Mr Johnson’s private secretary Emily Beynon accepted the resignation but said that the Cabinet Office ‘having made further inquiries into your case, have said that they continue to believe that there is no conflict of interest that would have prevented you from taking part in the Inquiry’.

Grenfell United said she had done ‘the dignified thing by resigning’, and that it ‘helps lifts growing anxiety ahead of phase two’, but added: ‘The government should never have put families in this situation, they failed to carry out basic checks and understand the importance and sensitivities around a fair and proper process. We still have questions for both the inquiry team and Cabinet Office to answer, as to how this situation was ever allowed to happen.

‘The government promised two panel members and must now urgently find a new panellist, to bring expertise on community relations to the inquiry. We do not need the pretence of diversity for the sakes of diversity. The panel does not need another technical expert where we already have ample provision.’

From the FPA – Fire Protection Association

Quiet start to 2020 for construction sectors
Scroll to top