All News
You are here: Home1 / All News2 / General News3 / COVID-19: US CONTRACTORS ARE PROVIDING MODULAR HEALTHCARE 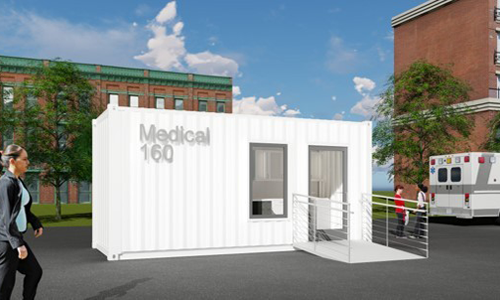 US container-based structure specialist SG Blocks has responded to the coronavirus pandemic by introducing a new product line of units designed to enable safe isolation.

SG Blocks, which designs and fabricates container-based structures, has introduced health and safety modules to help support the medical response.

It said that potential applications for the container-based product line include external patient care rooms, staff testing and re-testing centres, housing for hospital staff, offices for those requiring quarantine or monitoring and first-responder units. They could also be used for screening and quarantine at airports and venues.

“We believe these products can offer states, cities and employer’s options for those in their care or custody,” said Paul Galvin, Chairman and CEO of SG Blocks. “They are designed to help students, patients, health professionals and others exposed to Covid-19 isolate in a safe place. Those that work in the service economy, especially emergency and medical personnel, should have an option other than going home to risk infecting loved ones.”

PARTNERNING TO BEAT THE VIRUS

Two contractors are partnering to quickly add capacity to hospitals and medical facilities, and are waiving management fees on COVID-19 related projects. At least one hospital addition has already been completed — in less than a day.

Plaza Construction and Central Consulting & Contracting Thursday said they are to offering the service to hospitals in Connecticut, Florida, New Jersey, New York and the mid-Atlantic. Both are based in New York, but Plaza has a significant Miami presence.

The firms are using prefabricated materials to quickly adapt used spaces, add wings and create freestanding units. They have contracted with Brooklyn-based FullStack Modular to fabricate and ship modular units for time-sensitive orders.

For COVID-19-related projects, they will charge only labor and materials, said Plaza President Brad Meltzer.

“We have a rich history in healthcare construction and the construction sector. We recognize the severity of the situation. We want to put our staff and people to work, ” he said.

“The modular can be shipped out of the factory and put in place in a turnkey fashion,” Meltzer said.

Already, Central Consulting has built modular units with hospital beds for a New York City client, according to Central Consulting President Richard Simone. The hospital wanted to partition off space in the emergency room and adapt it for isolation rooms for COVID-19 cases. A team worked around the clock, using modular units to build seven rooms in 23 hours, he said.

“In that example it is very quick because they had the correct outlets, ventilation — everything was there and we just made separation rooms, which are not as complicated as a full intensive care unit,” Simone said.

Plaza also has experience with assisting in emergency relief efforts, Meltzer said, working with New York officials after the Sept. 11, 2001 attacks and New Jersey officials in 2012 after Hurricane Sandy.,

Both companies will continue to work on existing projects, said Meltzer and Simone. But they do expect headwinds and delays on projects outside of the healthcare system.

“We anticipate that some construction projects will be shut down due to government shutdowns. [But] we expect that these [healthcare system] projects will be allowed to continue on while we are controlling this pandemic,” Meltzer said.

Central Consulting was founded in 1986. Past clients include healthcare systems in the northeast. It has branches in New Jersey, Connecticut, Rhode Island, and, as of 18 months ago, Florida.

Plaza was founded in 1986. The firm has been active in South Florida since 2004; its recent projects include One Thousand Museum. It has regional offices in New Jersey, Washington D.C., Miami, Tampa, Orlando, Los Angeles, and San Jose.

COVID-19: construction can capitalise in the aftermath
Scroll to top