Air decontamination technology can provide up to 99.9999 per cent real-time protection for internal spaces from the aerosol transmission of SARS-CoV-2 and its variants, says its UK developers, to enable the full return of customers and workers to retail, hospitality, office and other locations, without fear of viral infection. The new Airora devices create a continuous cascade of hydroxyl radicals, which occur naturally in abundance outdoors, to deactivate dangerous indoor airborne viruses and bacteria.

The Airora products, developed by Hydroxyl Technologies Ltd (HTL), will be available as wall-mounted units for use in workplaces and free-standing for homes, estimated for the autumn of 2021, boosting societal and economic recovery and the preparedness for any future viral events.

To rapidly scale up commercialisation and production of the Airora products, HTL has engaged Opus Corporate Finance to raise £5m capital from new investor(s).

The naturally occurring abundance of hydroxyls makes outdoor air much safer in the fight against airborne pathogens like SARS-Cov-2, says HTL. The indoor creation of hydroxyls from the Airora products can continuously decontaminate aerosols in an enclosed space in minutes, giving protection for people to safely go about normal activities 24-hours a day.

The technology produces hydroxyls and trace elements of the same natural building blocks to create further hydroxyls, ozone and linalool, an oil given off by plants. The linalool reacts with the ozone to create a ‘hydroxyl cascade’ throughout the indoor space. This condenses rapidly onto anything it encounters, including aerosol droplets and particulates, to neutralise viral or bacterial pathogens, such as Coronaviruses, MRSA, C.difficile, E-coli, Norovirus, and Flu Virus.

HTL’s hydroxyl cascade technology was developed and tested for over 10 years at top research laboratories, including the Health Protection Agency (HPA) at Porton Down, now part of PHE, and the UK’s Building Research Establishment (BRE).

In tests, the Airora technology successfully eliminated aerosols of MS2 Coliphage, which is used as a surrogate in laboratory research into virus contamination as it is tougher to destroy than most pathogenic viruses, including SARS-CoV-2, but is harmless to people.

The hydroxyls react with the lipids and proteins in the thin, delicate cell membrane of a virus, causing it to lyse or break down, damaging the lipid envelope and capsid protein shell around the pathogen. This deactivates the protein it needs to enter human cells. Hydroxyls also penetrate the interior of the virus and disrupt its DNA, rendering it harmless and unable to infect humans and animals. 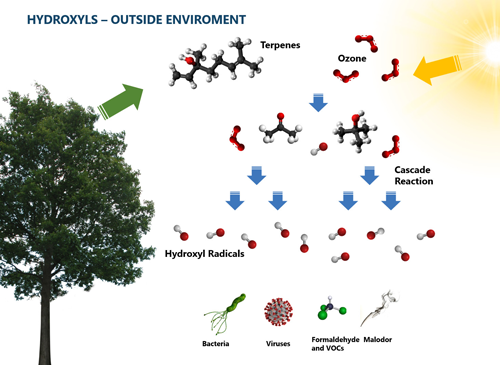 “Tests have included both airborne and surface challenges, but droplets and aerosol transmission are now recognised as the principal source of viral infections from SARS-CoV-2 and variants – this is where the real-time performance of the Airora technology shines. In tests, it killed all airborne pathogenic viruses and bacteria in minutes, and it does so by attacking the aerosols, there is no need to suck them through a filter.”

Discovered by the UK’s Ministry of Defence in the early 1960s, the process by which atmospheric hydroxyl radicals are generated became known as the ‘Open Air Factor’. Hydroxyls are highly reactive molecules of oxygen (O) and hydrogen (H), with the chemical formula OH.

Hydroxyls are continuously produced in abundance in the earth’s lower atmosphere where weather occurs. There are on average more than two million hydroxyls in each cubic centimetre of outdoor air during daylight hours. While Hydroxyls occur naturally in the open air, they are generally absent in enclosed areas such as buildings.

Airora is the only tested technology that can deactivate and continuously suppress both air and surface borne viruses and bacteria in a confined space, says Alan Mole. This is achieved by combining hydroxyl radical emission with ozone and linalool (a natural plant oil) diffusion to create a continuous hydroxyl cascade in a room that kills pathogen aerosols.

The Airora technology will meet different needs, from products suitable for small rooms like bedrooms, to products for large office spaces, and a personal product that can be worn around the neck when travelling.

Other technologies that are currently on the market rely on filtering or otherwise cleaning the air that passes through the purification machine. This includes systems that use filters or rudimentary hydroxyl-based air cleaners, without the Airora’s patented ozone and linalool facilitation.

These devices have several drawbacks. Filter-based technologies can only reach their theoretical maximum level of pollution reduction after several hours. Meanwhile, new contaminated air may have entered the room – normally air is largely replaced from outside at least once every hour. Moreover, some air in a room will never reach the purifier because of a combination of rising warm air and moving air currents.​ ​

Hydroxyl Technologies and the Airora products were born from the research of Tri-Air Developments Ltd, from 2006 to 2017. Tri-Air developed the novel hydroxyl cascade technology created by inventor and microbiologist Alan Mole during the 1990s. In partnership with BRE Ltd, they undertook over 10 years of prototyping and extensive microbiological and air quality testing at world-leading laboratories, including the UK Health Protection Agency (HPA) at Porton Down.

Tri-Air underwent a change of investors in late 2015, which led to some of the original founding directors, led by Lorraine Baldry and Alan Mole, acquiring all of the Tri-Air intellectual property rights and forming Hydroxyl Technologies Ltd (HTL).

Polypipe is number one at Old Trafford