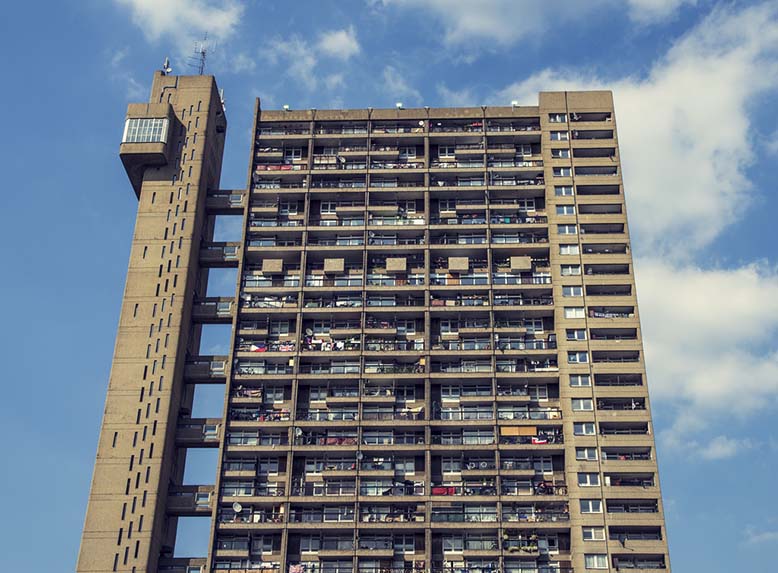 Carried out on behalf of Kensington & Chelsea Tenant Management Organisation (KCTMO), the work marks a major investment in the preservation of the historic tower in Kensal New Town.

Following extensive planning and liaison, work on the programme is scheduled to commence immediately and will include the repair, renovation and replacement of the Grade II* listed building’s concrete, cladding and approximately 1,000 windows.

Trellick Tower was designed by Hungarian Modernist architect, Ernö Goldfinger, and was built in 1972 as part of the Brutalist architecture movement that arose from the 1950s to the mid 1970s. The tower became the inspiration for JG Ballard’s novel ‘High Rise’, which was made into a film starring Tom Hiddlestone in 2015.

Wates will first commence work on the six-storey Block B, which will be followed by the external refurbishment of the 31-storey Block A in June this year. Overall completion is expected by summer 2018.

As part of the mobilisation of its team, Wates is currently making arrangements for a range of community initiatives that will be delivered throughout the programme. This will include a series of training and employment opportunities for local people as well as engagement with local social enterprises.

The project follows from a framework agreement between KCTMO and Wates, which began in 2015, for Wates to carry out internal and external works in the north of the borough.

David Morgan, Managing Director of Wates Living Space, said “It is a huge honour to be entrusted with the refurbishment of such a historically significant London tower block. This project will involve a meticulous balance of ensuring we preserve the building’s iconic status while, most importantly, delivering the vital work with minimal disruption to Trellick Tower residents. We very much look forward to continuing our work with KCTMO and to getting under the skin of what is a landmark piece of post-war architecture.”

Robert Black, KCTMO Chief Executive, added “We’re very pleased to be working with Wates on such an important project. Both ourselves and Wates are working closely with residents to ensure that they’re fully informed and we’re committed to supporting them throughout the project. This iconic building is a favourite to many and this work will help ensure it stays that way.”

In addition to its importance as a Grade II listed residential building, Trellick Tower has featured heavily in popular culture since its construction. This includes its appearance in a series of music videos throughout the past two decades.

Standing at 98m high, the building’s unique shape and structure was also the inspiration for Channel 4’s famous reinforced concrete ‘4’ that is used to link between its programming.

Government will fail to keep housebuilding promise of 200,000 homes by 2020