All News
You are here: Home1 / All News2 / General News3 / 32% of UK builders are exposed to asbestos every single week

New research has found that 32% of UK builders are exposed to asbestos every single week.
Ahead of Mesothelioma Awareness Day (26th September), an event aiming to bring more attention to the dangers of asbestos, ElectricalDirect surveyed trade workers from across the nation to see how often they encounter it, and the impact this has on their health.
The study found that 79% of builders have come across asbestos – the fibre-like material once used for insulation – in their working lives.
This has serious consequences, with 45% having had symptoms of an asbestos-related disease, or knowing a colleague who has.
Tradespeople are amongst the most at-risk workers of asbestos-related diseases, and across all industries, the majority are exposed to the potentially lethal material on a regular basis. Three in five (60%) find it every year, over a third (35%) say every month, and one in 12 (8%) come face to face with asbestos every day.
Tragically, one in 20 (5%) know someone who has died of such a condition, and every week, 20 tradespeople deaths are attributed to asbestos.
Some trades are more likely to be exposed than others, and so should be particularly cautious. Almost every carpenter (95%) questioned had some history with asbestos, and bricklayers (88%) are a close second.
The trades that are most likely to encounter asbestos are: 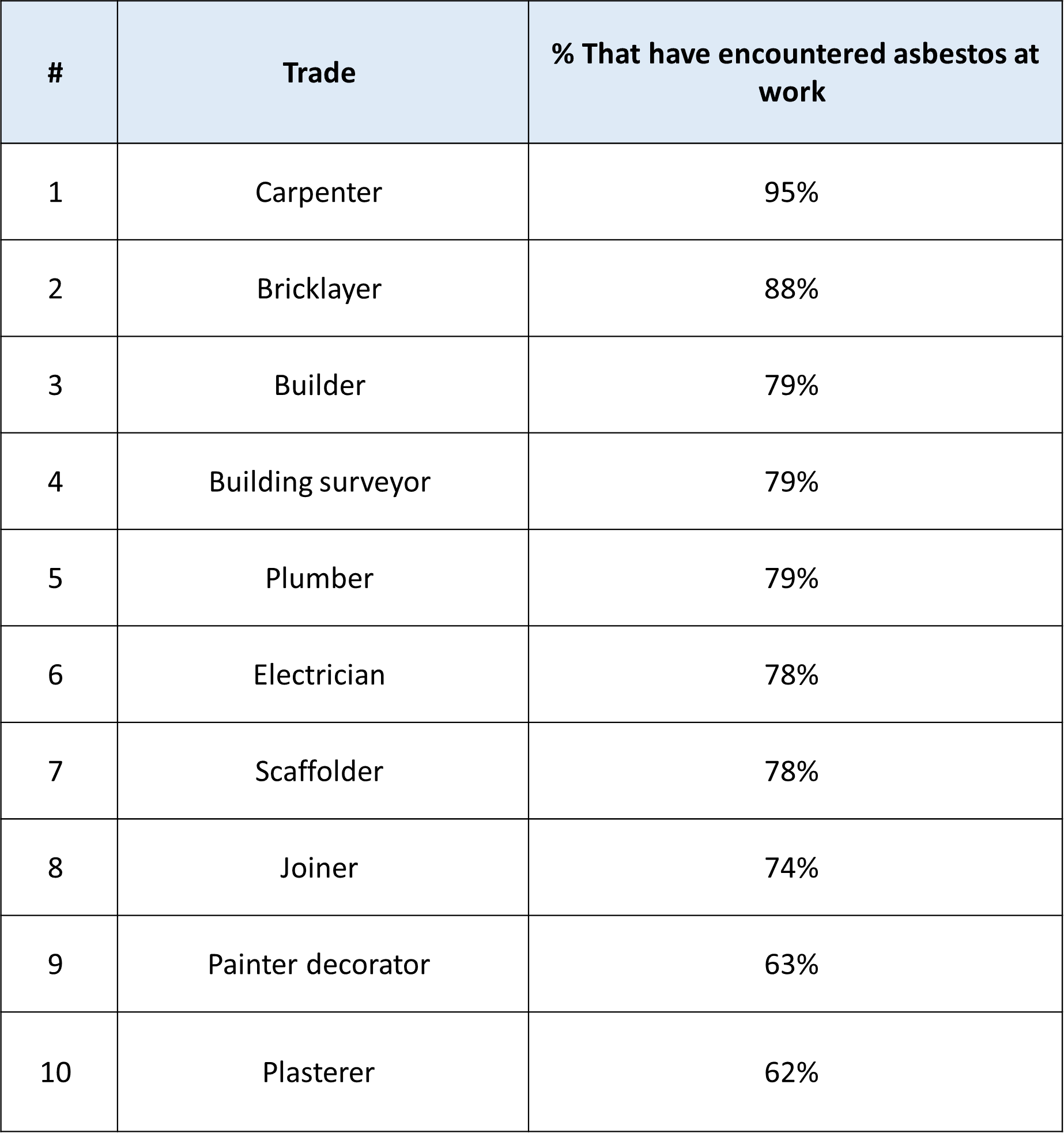 With such severe consequences, it’s important that tradespeople know the warning signs of the diseases, and consult a doctor straight away if any appear. Dr Rhianna McClymont, Lead GP at Livi, the digital healthcare provider, says that asbestosis causes a range of symptoms, including:
However, ElectricalDirect’s research found that the majority of UK tradespeople are unaware of these symptoms. When asked to identify the signs of asbestosis, almost two-thirds (64%) failed to select a persistent cough, and over half (55%) didn’t pick out shortness of breath.
Dr Rhianna explains more about the condition:
What is abestosis?
“Asbestosis is a chronic lung disease caused by breathing in large amounts of asbestos dust for a long time. The asbestos gets lodged in the lungs causing scarring around the air sacs (alveoli), which means oxygen can’t reach the bloodstream easily. The scarring leads to the lungs hardening, making it more difficult to breathe because the lungs cannot hold as much air as they used to.”
What causes it?
“The condition is caused by long-term exposure to asbestos, a material used in the past for cement, insulation, car parts, and some roof and floor tiles. The fibres in asbestos break down into little pieces when they’re damaged, released into the air and then breathed in. These fibres get stuck in the lungs, and over a long time, can cause permanent lung damage.”
Dominick Sandford, Managing Director at ElectricalDirect, said: “Despite being banned in the UK in 1999, asbestos is a still a real issue in the industry, and it’s awful that so many tradespeople die from related diseases every year.
“Some people might not experience symptoms for decades after their exposure to the material, so it’s important that individuals remain vigilant, and see a doctor immediately if they spot any signs.”
CLICK HERE
to read ElectricalDirect’s full Asbestos and the Trades: 2022 report, including what
to do if you encounter asbestos at work, and the treatment options for those who spot symptoms.
September 23, 2022/0 Comments/by Lyn
https://buildingspecifier.com/wp-content/uploads/2022/09/BSC-3-23.09.22.jpg 320 800 Lyn https://buildingspecifier.com/wp-content/uploads/2019/06/building-specifier-logo.png Lyn2022-09-23 11:02:222022-09-23 11:02:2232% of UK builders are exposed to asbestos every single week
0 replies