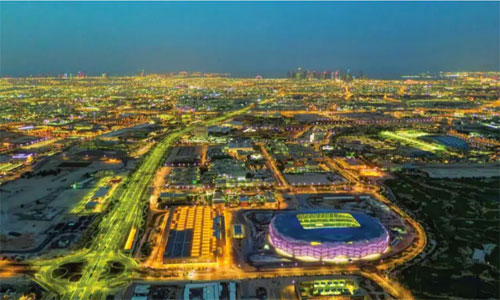 Education City Stadium is the third FIFA World Cup Qatar 2022 tournament venue to be completed, following the successful redevelopment of Khalifa International Stadium in 2017 and the inauguration of Al Janoub Stadium in 2019.

To-date, Education City Stadium is the first Qatar 2022 venue to receive a five-star rating under the Global Sustainability Assessment System (GSAS), which is managed and administered by the Gulf Organization for Research and Development (GORD).

GORD compiled the following sustainability features about the stadium – all of which helped it to achieve an outstanding rating.

Passive design: A passive design is one that takes advantage of the climate to maintain a comfortable temperature inside the structure. It reduces or eliminates the need for auxiliary heating or cooling, which generally accounts for a large percentage of energy use. Education City Stadium incorporates passive design through a number of techniques. Its façade makes use of highly efficient building fabric for shading purposes. This provides better insulation and protects the interior from extreme external conditions. Similarly, the structure of the stadium has been built at a lower level than the natural grade, which adds to the project’s overall insulation and temperature control mechanism. This will reduce the overall energy consumption in relation to the venue’s cooling needs.

Post FIFA World Cup legacy: After the World Cup, the stadium’s seating capacity will be reduced from 40,000 to 20,000. The modular upper tier will be removed in order to provide a sporting facility which is suitable for local requirements, notably the needs of the Qatar Foundation (QF) community. The seats which are removed will be donated to countries which lack sporting infrastructure in order to help spread the legacy of Qatar 2022 far and wide. In addition to providing sporting facilities for the QF community, parts of the structure will be turned into lecture halls and event spaces for the various universities which are based at Education City.

Urban connectivity: The stadium takes advantage of urban connectivity through a number of public transport options, notably the Doha Metro. Education City Station, on the Doha Metro Green Line, is located just 500 metres from the stadium and will make it easy for thousands of fans to get to and from the venue during the FIFA World Cup. The stadium is also close to Education City’s People Mover System, while for private vehicles there are multilevel car parks and a number of taxi drop-off locations.

Water conservation: The installation of low-flow water fixtures means domestic water usage at the stadium is designed to be 55 percent more efficient than conventional stadiums. In addition, landscaping around the facility contains native and drought-tolerant flora to reduce water consumption. The use of water-hungry turf is minimal. About 75 percent of the landscaping is enhanced by an efficient irrigation system which features inline drippers, pressure-compensated bubblers and an automated irrigation control unit. To reduce water loss, organic mulching and gravel have been used to cover the soil without impacting on the health of the flora.

Energy efficiency: A host of measures help to conserve energy within the stadium, including LED lighting systems with automatic controls, demand-controlled ventilation systems, e-glazing windows and high resistance insulating materials. The cooling for the stadium is provided from a highly efficient district cooling system.

5* GSAS rating: For its outstanding sustainability features, the stadium has earned three GSAS certifications from GORD, making it one of the most sustainable venues for Qatar 2022. The stadium has received the following certificates: GSAS Design & Build (5*), GSAS Construction Management (Class A*) and GSAS Seasonal Energy Efficiency Ratio.