There are many examples of elaborate, ostentatious cites that serve more as a playground for the rich and elite rather than a functional, thriving metropolis. These places construct more rapidly (and sometimes recklessly) than anywhere else in the world. We take a look at perhaps the most infamous example of rapid expansion and ‘construction boom.’

It has been said that 30% of the world’s cranes are working in Dubai in the United Arab Emirates. Once the pinnacle of the world economic boom, Dubai now teeters on the brink of bankruptcy. Shanghai in China witnessed such rapid expansion and proliferation of high rise construction following economic reforms in the early 1990s that it is now considered one of Asia’s financial centres and the busiest container port in the world. This of course comes at a price, as the rapid growth in population, factories and motor vehicles has generated environmental issues such as air and water pollution, the accumulation of solid wastes and the lowest birth rate in China.

Vegas has had a rocky economic past, suffering greatly throughout the recession, which saw hotels go under, construction sites abandoned, foreclosures, bankruptcies and an unemployment rate estimated at somewhere between 7 and 13.2%. A recent report in the area echoes similar industry complaints we are used to hearing here in the UK; 80% of employers are saying that they can’t find skilled workers such as plumbers, carpenters and roofers—despite 100,000 people losing their jobs during the last recession.

However, seemingly in the face of adversity Las Vegas has financially come up trumps. In 2005 American business magnate Steve Wynn started the latest and largest building-boom, with high-rise, condo, hotel, mixed-use, adaptive-reuse and other projects in the area currently in various stages of planning, development and construction.

With economy and construction industry now seemingly back on track, the city finds itself facing issues arguably far greater than any financial or commercial concerns it has experienced historically. Alarmingly, Vegas could run out of water by 2036. Not a financial, sociological or cultural draught but an actual, acute shortage of water that sustains the ability to live, work and play in the middle of the desert.

The city of Las Vegas relies entirely upon a reservoir created by the iconic yet controversial Hoover Dam. After a 14-year drought, experts say that the water level in this reservoir is now well below half full. Due to the population swelling from 400,000 to 2 million since the dam was created in 1936, a massive 4 trillion gallons of water has been drained from the lake that supplies 90% of the Vegas’s water. 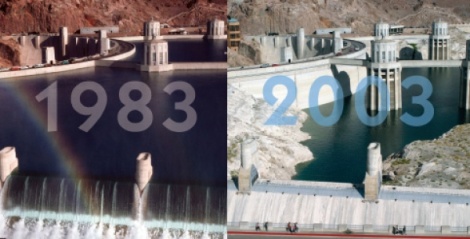 There are currently two pipes that transport this water 25 miles from the lake to Las Vegas. The first extracts water at an elevation of 1,050ft and is suspected to be sucking at air rather than water in the near future. The second straw is at 1,000ft; which is okay for now.

A £480million rescue mission is underway and expected to be finished by the end of this year to complete a new, lower straw which will be able to draw the very last of the water from the lake.

Currently a giant drill the size of two football pitches is advancing at a snails pace of one inch per day to make this a reality. Unfortunately, once completed the new pipe will only prove a temporary solution to a permanent problem, as the lake will continue to deplete rapidly, running the risk of becoming a “dead pool.”

Despite the near-chronic water situation, Las Vegas still uses 219 gallons of water per person per day, one of the highest figures in the entire USA. A large percentage of this water is used to sprinkle golf courses, parks and lawns. In response to this, the water authority has declared war on grass, paying homeowners to remove it from their gardens at the rate of $1.50 per square foot. So far 165 million square feet of turf has been destroyed, which if laid end to end in an 18-inch strip would stretch 90% of the way around the Earth.

The dimming of lights

The current daily usage of electricity in Vegas is roughly 8,000 megawatts. Furthermore, each new resident of Vegas is estimated to need 20,000 KWh of electricity every year.

Perhaps obviously Hotels and Casinos consume the most electricity. With the constant addition of gaming machines, flashing lights and air conditioning, expansions currently under construction will serve only increase the need for power even more.

Tying in with the draught, Las Vegas consumes 15% of the electricity generated by the Hoover Dam. This is predicted to be insufficient to meet the needs of the future, especially as water levels lower; it appears that soon the giant concrete arch-gravity dam will offer a diminishing return.

The higher they build, the harder they fall

Sustaining a city (especially one as excessive as Las Vegas) deep in the desert is no mean feat. It seems that in the battle against nature the house doesn’t always win – attrition does. Aerial photographer Vincent Laforet described Sin City as an “island of light in the middle of nothingness.” Through rapid, ill-thought out construction, greed and reckless it now runs the severe risk of becoming an island of nothingness in light of the warnings. Viva Las Vegas – I hope!