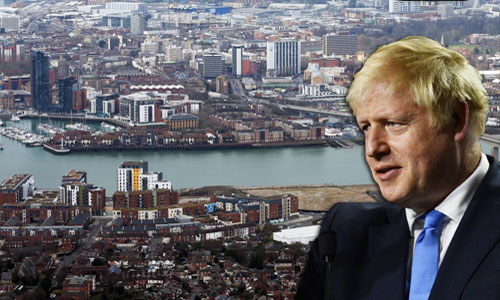 “We’ve got a huge new Towns Fund which is going to be giving £3.6 billion altogether”

That was the claim from Boris Johnson on Friday. In March this year, Theresa May announced £1.6 billion for a new “Stronger Towns Fund”. The idea was to boost the local economies of towns that had been “left behind”.

In July, the new Prime Minister committed to add an extra £1 billion to the pot, bringing the total value of the Stronger Towns Fund up to £2.6 billion.

The Ministry of Housing, Communities and Local Government say that the “Towns Fund” now comprises the “Stronger Towns Fund” and another pot, the “Future High Streets Fund”.

The Future High Streets Fund was announced in October 2018 and given £675 million to spend. Boris Johnson has since topped that up with an extra £325 million to bring the total to £1 billion. When you add that to the Stronger Towns Fund, you get a grand total of £3.6 billion.

So is Mr Johnson right to refer to this as “new”? If he means that the Towns Fund itself is new, then he’s right — before he took office, the Stronger Towns and Future High Street Funds were separate, and now they are combined.

But the key question is: how much of that £3.6 billion is new money? The answer, as the government’s own press release comes close to admitting in paragraph 11, is £1.325 billion.

It’s not the first time Mr Johnson has referred to the “£3.6 billion” figure — it cropped up in July during one of his first speeches as Prime Minister — though on that occasion he didn’t indicate whether this was all new money or not.

Home lifts – the sustainable and ‘whole of life’ solution