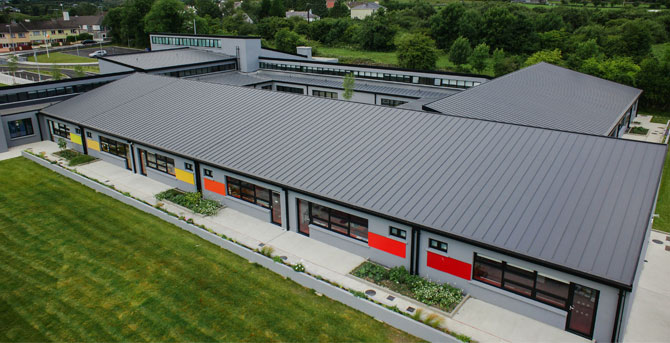 Oughterard National School is a new single-storey primary school situated in the Connemara district of west Ireland. The architectural vision for this new building, which boasts 16 state-of-the art classrooms, was to create a modern and aesthetically pleasing learning environment that would add real value to the local community. Another priority to the design team was using sustainable technologies and construction techniques to help reduce the building’s environmental impact.

The school building consists of eight roof areas on a variety of different pitches totalling over 3,400㎡ in all. Aesthetics were important to the client as most of the roof areas are pitched at a 20° slope making them highly visible, particularly from the central courtyard area. Bauder’s Thermofol single ply membrane was specified for the new roof because it is lightweight, long lasting, and visually appealing – with welded roof profiles incorporated to give the appearance of a standing seam metal roof. The system build-up also included Bauder’s 120mm Thermotech Glass Insulation for superior thermal performance, ensuring the roof achieved the required 0.19 U-Value.

Due to the visibility of the roof, all aspects of the job were under high scrutiny. The roof profiles had to be lined up perfectly along all the hips and valleys of the roof, requiring a high degree of skill and workmanship from approved contractor Noel Deane Roofing & Cladding, which they well and truly delivered on much to the delight of project specifier Martin Keaveney of JJ Rhatigan who stated, “Bauder were able to provide all the roofing materials needed, which enabled them to deliver a comprehensive solution and guarantee. They satisfied all delivery commitments and the new single ply roof looks and performs just as we expected.”

Since opening in September 2013 this contemporary school building has been recognised for its innovative design and architectural excellence by many award-giving bodies, including being shortlisted for the Best Educational Building at the RIAI 2014 Irish Architecture Awards. The school has also been commended for its environmental efforts, an example of this being how they collect and store rainwater in a reclamation tank so that it can be reused throughout the building.