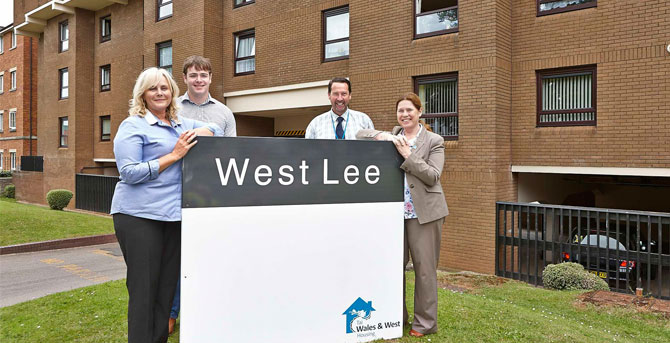 Leading commercial fabricator Solar Windows has just completed a large scale project for Wales & West Housing (WWH) under a framework agreement which represents the latest phase in a successful twelve year association between the two organisations.

Originally ‘partnered’ together in 2002, Solar Windows remains a key supplier to WWH and continues to manufacture and install REHAU PVC-U windows and doors for the housing association’s ongoing maintenance and replacement programme.

Most recently, Solar has installed 450 casement and tilt and turn frames in the REHAU TOTAL70C system in the West Lee housing complex in Cardiff, to replace single glazed aluminium windows which were in place previously.

This was part of a major refurbishment project designed to improve both the energy efficiency and security of the 130 flats and maisonettes within the complex. Alongside cavity wall insulation, the double glazed windows are key to improving the comfort levels for residents and reducing their energy costs.

The windows have been foiled in a Rosewood woodgrain finish and those which overlook the busy Cowbridge Road East in Cardiff have been fitted with acoustic glazing to reduce the internal noise levels.

As well as the windows, Solar Windows has also manufactured and installed fire doors for the communal areas and stairways. These feature an intumescent material which expands in heat to create the barrier required to achieve a 30 minute fire rating.

They have also supplied their ‘Solardor’ GRP composite external doors with improved security to provide extra reassurance for residents.

Solar Windows and WWH marked the completion of the project with a joint visit to the West Lee complex where WWH Chief Executive Anne Hinchey thanked all of the team involved for their efforts and hard work.

Ms Hinchey said: “Our West Lee scheme has undergone extensive refurbishment work and energy efficiency improvements over the past year for the benefit of our residents. The WWH team, Solar Windows and our further partners have worked incredibly hard throughout the project to deliver this work to the highest standard, for which I want to thank all involved.

“I’m pleased to say that feedback from our residents living at West Lee has been fantastic. We hope that they will enjoy the benefits of the improvements for many years to come with warmer homes, improved security and substantially reduced energy costs.”

Solar Windows is one of the UK’s largest commercial window and doors fabricators specialising in work across the public sector. Further details are available at www.solarwindows.co.uk