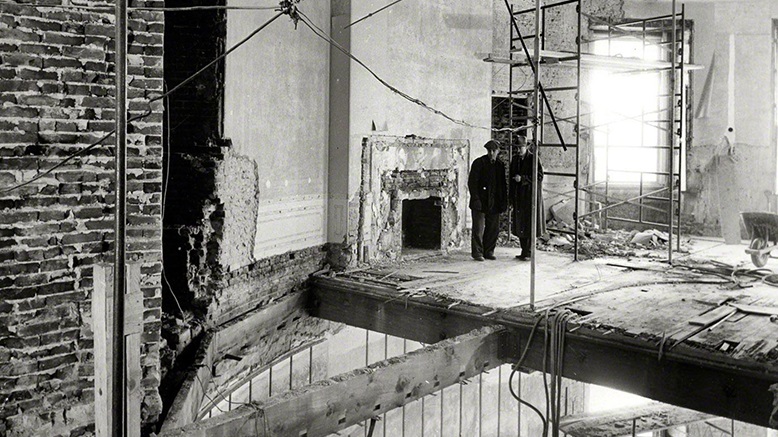 Britain’s beloved historic buildings are at risk, due to a restoration skills crisis that threatens the future of some of our best-known national treasures, warns a RICS and YouGov survey.

Restoration of the Year

Despite over a million people tuning in to Channel 4’s latest series Great British Buildings – Restoration of the Year, and a new YouGov survey commissioned by RICS finding that 91% of the British public believe historic buildings are symbolic of Britain’s heritage, young people have little awareness of the specialist professions and trades essential to their preservation, suggesting that as people retire, the current skills base could be all but wiped out.

According to the survey, 9 in 10 people (91%) agreed that buildings such as Windsor Castle and Kensington Palace are symbols of the country’s heritage. This sentiment is strong across all age groups, including millennials, with 89% of 18-24 year-olds appreciating the importance of historic buildings.

The vast majority of the population (89%) also believe that that these iconic treasures should be preserved for future generations and place the responsibility for maintaining them firmly at the door of the government (42%), followed by industry organisations (16%) and the general public (14%).

Appreciation for historic buildings is particularly strong in West Midlands, with almost two thirds (65%) saying that it’s ‘very important’ such buildings are preserved, while around 2 in 5 respondents (42%) from Scotland say the same.

However, despite the public’s love for these buildings, the majority don’t understand the specialist skills needed to restore and preserve them. For example, 83% are not knowledgeable about what a historic building surveyor does, and 80% do not know what a roof thatcher’s job entails. Awareness of age-old building professions is fading away amongst the younger generation, with only 1 in 10 18-24 year-olds able to describe the job of a stonemason, and only 16% know what a glass blower does.

This lack of awareness comes at a time when the industry as a whole is facing a skills shortage in the built environment, with the latest figures from the RICS Construction Market Survey showing that the skills gap reported by professionals across the construction sector increased from 2% in 2012 to 43% in 2016.

A pipeline of talent

To ensure that these crucial skills are not lost and cherished historic buildings don’t fall into disrepair, a stronger pipeline of talent is needed. It’s important that craft skills are developed in addition to the continual promotion of professional skills, as the two skillsets are intrinsically linked to create any successful construction project.

RICS is calling on the government and industry bodies to continue to concentrate their efforts on inspiring young people to pursue a career in the sector and educate them on the importance of mastering and maintaining the skills needed to preserve our historic buildings.

Kevin McCloud, British designer and presenter said “Historically listed buildings form part of the fabric of our rich cultural heritage and today’s findings from RICS highlight that so many Brits are genuinely passionate about protecting the physical legacy that these buildings represent. I’m very pleased to be hosting Channel 4’s Restoration of the Year programme, which shines a spotlight on the care and craftsmanship behind preserving these national treasures.”

Matthew Howell, RICS Managing Director for UK & Ireland added “It’s fantastic to see that so many people care about our historic buildings, especially young people. However, without a pipeline of talent developing expertise in these specialist areas, these landmarks could be left in ruin. We need the next generation to understand the role of a historic building surveyor, and the craft of a stonemason or glassblower to preserve this heritage for the future.

“The government and industry bodies must continue to work together and raise awareness of the wide-range of opportunities available in the industry and create more routes into the sector for young people, including investing in quality apprenticeships that lead to roles such as qualified building surveyors who specialise in conservation projects.”